Churches were analysed across eight different categories; interiors, stained glass, churchyards, atmosphere, wildlife, national history, monuments and social history. The counties that are home to the highest percentage of churches in each of these categories are revealed to provide hotspots for church tourism. Visitor facilities were also examined to determine, for the first time, the county that has the highest percentage of ‘five-star churches’, and therefore offering the best overall visitor experience.

Find out more on ExploreChurches 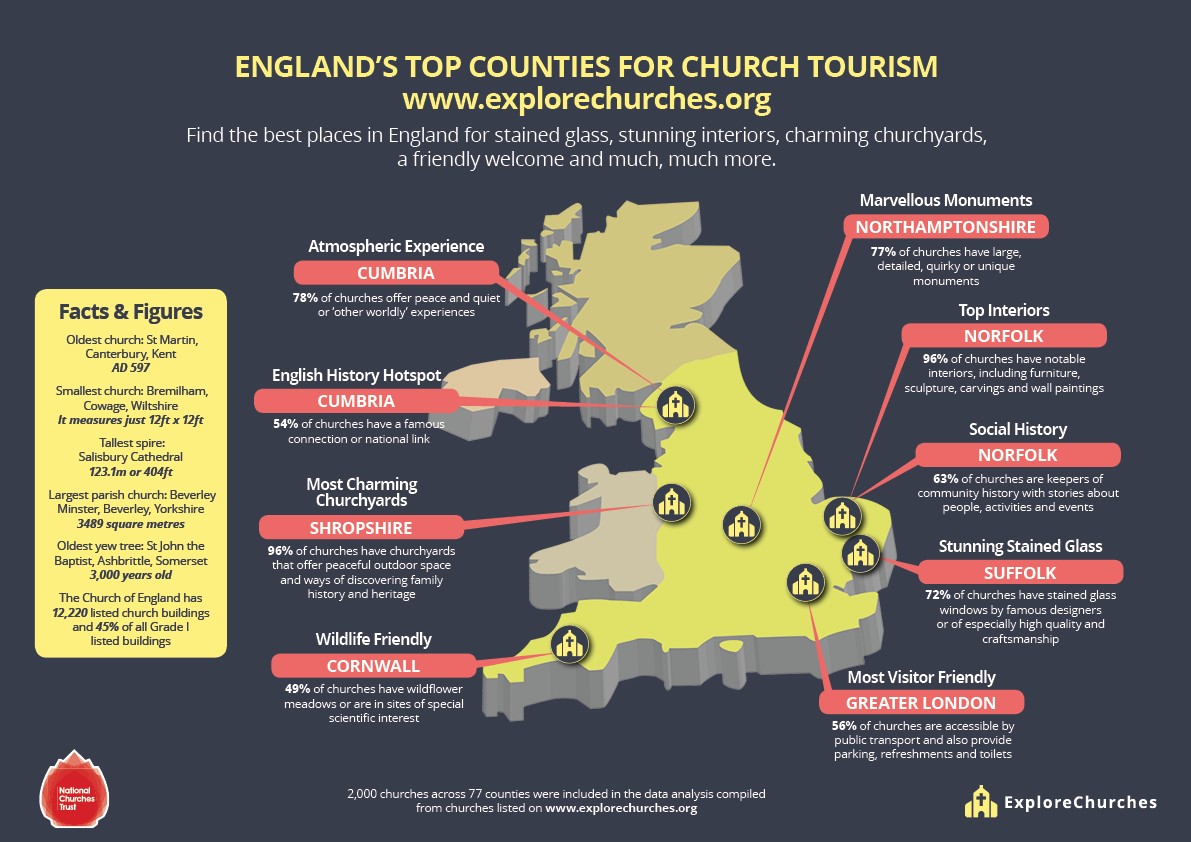 The analysis follows the National Churches Trust’s poll of 2,037 British people, conducted by ComRes, which shows 49 per cent of British people visited a church in the last year.

Almost a quarter of British people said they would be more inclined to visit a church as a leisure activity or tourist attraction if there were better visitor friendly facilities (23 percent), and 19 percent said they would visit if they knew in advance that the door of the buildings was unlocked.

The poll of 2,037 adults in Britain was conducted by ComRes, a member of the British Polling Council, on behalf of the National Churches Trust in September 2018. Full data table available.

“The ExploreChurches analysis will help tourists and visitors discover the amazing heritage of churches and chapels.

“We hope it will encourage more people to become passionate about these tremendous buildings packed with memories of human life often dating back over 1,000 years.

“As well as signposting the best architecture, stained glass, and history, our data also includes information on visitor facilities, which allows us to suggest which churches are ‘five star’ attractions.

“Our study shows that churches and chapels offer a tremendous range of unique experiences for visitors including tower climbing, wildlife spotting and even live music. There really is something for everyone.”

What makes a church ‘5 star’? Visitor-centred facilities such as parking, refreshment and toilets have been deemed as key features of a 5 star church. Bringing churches closer in line with other major tourist and leisure attractions, this rating helps visitors know what to expect if planning a visit, from a practical point of view.

Greater London scores the highest when it comes to visitor experience, with more than half (56 percent) of churches included in the study being accessible by public transport and providing parking, refreshments and toilets. Yorkshire was the second most visitor friendly (49 percent), followed by Surrey (38 percent). Churches in this category are commended for smoothly combining historically rich surroundings with modern day facilities.

Norfolk is joint first with Shropshire for the county with the highest percentage of churches with stunning interiors; including furniture, embroidered altar cloths, art, sculptures, carvings in wood and stone and ancient and modern wall and ceiling paintings.  Nearly all (96 percent) of its churches are recognised for their interior features, followed by Somerset (94 percent), and Oxfordshire (93 percent).

Suffolk joins Cornwall and Cumbria in the top three counties in England for stained glass windows, with 72 percent of its churches, the highest in the country, being recognised for the people they depict, the stories they tell and their famous designers from pre-Raphaelites to modern day artists.

Cornwall is the top place for discovering wildlife in church grounds, with almost half (49 percent) of its churches either having wildflower meadows, unmown areas of the churchyard to encourage native species or being recognized as sites of special scientific interest. Lincolnshire is the second-best county (48 percent) for its wildlife friendly churches followed by Cumbria (42 percent).

Shropshire is the top county for exploring churchyards with 96 percent listing them as significant features, followed by Warwickshire (84 per cent) and Somerset (82 percent). Its churchyards are considered keepers of community heritage; a rich resource for seeking out family history and other historic information from gravestones.

Cumbria has the highest percentage of churches offering ‘atmospheric’ or ‘other-wordly’ surroundings (78 percent), followed by Cornwall, which is the second best county (69 percent). Often small and rural, these churches are sometimes referred to as the ‘thin places,’ a term used by Celts and Christians.

Cumbria is the top county for churches with links to our national heritage with over half (54 percent) stating a famous connection or association with a national event, followed closely by Greater London which reported 53 per cent of its churches had national links.

Northamptonshire has the highest percentage of church monuments (77 percent), followed by Warwickshire (66 per cent), Shropshire (61 per cent), and Suffolk (59 percent). It is recognised for being home to both large, detailed and glorious monuments, as well as those that are quirky and unique. Monuments include architectural or sculptural memorials made to remember individuals and historic events and often display fine stone carving and other artistic characteristics.

Norfolk has the highest percentage of churches, both old or new, which 63 percent considered keepers of community history, with links to stories about people, activities and events throughout the years.  Cumbria and Greater London follow closely with 61 percent of its churches revealing more about our social history.

The National Churches Trust collated data from over 2,000 churches across 77 counties.

Only counties that have 26 or more churches (the national average for the number of churches per county) have been included in the final study to ensure a fair and comparable analysis. These include: Cumbria, Greater London, Shropshire, Oxfordshire, Warwickshire, Northamptonshire, Hampshire, Cornwall, Somerset, Sussex, Herefordshire, Cambridgeshire, Surrey, Kent, Dorset, Yorkshire, Devon, Lancashire, Lincolnshire, Norfolk, Essex, Gloucestershire, Suffolk and Greater Manchester.

ExploreChurches, from the National Churches Trust, is a high quality resource for visitors and churches, supporting and promoting a beautiful collection of fascinating places to visit.

Churches, chapels and meeting houses are 'treasure houses' of heritage, history and community. The potential for churches to attract visitors and for visits to be enjoyable and worthwhile is huge. The UK has a wonderful national collection of churches, chapels and meeting houses peppered across the countryside and nestling in our towns. Perhaps this is why visiting churches (both old and new) is one of the most popular pastimes in the country, and such sites also attract foreign visitors.

ExploreChurches is the perfect place to discover a love for churches, and to find out all the information needed to visit.