When the parishioners of St Macartan's, in the green hills of Co Tyrone in Northern Ireland, were locked out of their church during the pandemic, they drew comfort from walking to the graveyard to see the church's windows being restored.

They watched as the stained glass was removed from rotten window frames, expertly repaired and cleaned, then put back into new frames to sparkle with the same brilliancy as when they were first installed in 1922.

"This work has been a real resurrection for the parish. It lifted a lot of people during lockdown. We've learned to appreciate the windows even more and it feels great that we are conserving them for the next generation," says Mary McGee, a member of the committee that organised the restoration.

St Macartan's, a simple stone church near Augher in the Clogher Valley, is among those benefitting from work being carried out by the National Churches Trust (NCT) to help Northern Ireland's historic churches.

As part of its strategy to help ensure the sustainability of the UK's churches and chapels, over the last couple of years the NCT has worked with the Ulster Historic Churches Trust and stakeholder groups to set up a new Northern Ireland 'Places of Worship Forum'.

With funding support from the National Lottery Heritage Fund, the Pilgrim Trust and the Department for Communities the Trust's is also running 'Treasure Ireland', a three year project to support historic places of worship in Northern Ireland and which making funds available towards work such as the restoration of St Macartan's windows.

Known locally as the Forth Chapel, and completed in 1846, St Macartan's is a Catholic church on the site of an ancient fort where hundreds would attend open-air Masses in penal times.

Work on the four newly restored windows was originally led by the celebrated stained glass studio artist Harry Clarke of Dublin in a style reminiscent of Art Nouveau. One is dedicated to Rose Kavanagh, who attended the Dublin Metropolitan School of Art and was a pivotal figure in the Gaelic Arts Revival, and a friend of W.B. Yeats.

Her window shows St Macartan, one of the earliest Irish saints and the first presiding Bishop of Clogher from 454. Macartan was St Patrick's 'Strong Man' who, according to legend, carried his elderly mentor through rivers and rough country on his missionary journeys.

Mary McGee and her team sought the grant just as the Trusts's 'Treasure Ireland' project was launched in 2019. Guided by the NCT, they included with their bid a thorough survey by their architect together with an estimate of the cost of the work. They received £7,500 with £2,500 coming from the Wolfson Foundation.

"Yes we had luck, but you have to meet luck half way," says Mary.

'St Macartan is B+ listed (roughly equivalent to Grade II* in England and Wales) as is another 'Treasure Ireland' beneficiary, the First Non-Subscribing Presbyterian Church in Newry, Co Down.

This grant is funding work to restore the frames holding stained glass windows which for the Newry Church is one in a long list of problems being addressed after poorly executed repairs in the 1990s. The church's managers are roughly half way through repairing the damage and are approaching the task with a new confidence thanks to the NCT.

"The Places of Worship Forums are a great idea," says the convener of the church's property committee, David Hanna. "People with real passion are sharing their ideas with others; as in examples of capable contractors and proven solutions. It's fantastic having this expertise at our fingertips. It is worth as much as the money.

David's church (pictured left) is far removed from the archetypal plain Presbyterian meeting-house. Completed in 1853, it is Gothic Revival with a graceful spire, and fits well into the town streetscape complementing the Catholic and Anglican places of worship built around the same time.

It is a fine example of the immense variety of denominations in Northern Ireland each with their distinctive buildings.

The Non-Subscribing Presbyterians originated with the Presbytery of Antrim in 1725 when they rejected compulsory subscription to the Westminster Confession of Faith and as a result were separated from the original Presbyterian body founded in 1642: in their churches the Bible faces the congregation rather than the pulpit, symbolic of the invitation to the people to take their own reading from Scripture.

Sadly this has not prevented the Newry church from coming under attack, with windows smashed twice in recent years. The second attack in 2019 was classified by police as a hate crime.

After these recent attacks, the congregation was heartened to receive messages of support from other local churches. Symbolic of the local outrage, members of the Catholic community spearheaded a fund-raising evening, donating over £1,000. The bill for the current project to replace three windows is close to £40,000 with the 'Treasure Ireland' project and the Wolfson Foundation contributing £12,500.

920 places of worship are listed

There are around 2,500 churches and chapels in Northern Ireland – more per head than anywhere else in the United Kingdom. According to the 2011 census, the biggest denominations are Catholic (41 per cent), Presbyterian (19 per cent), Church of Ireland (14 per cent) and Methodist (3 per cent).

Some 920 places of worship are listed buildings, 12 of them cathedrals. The different traditions have problems in common: declining congregations, falling income and a struggle to maintain their buildings.

The NCT's Senior Church Support Officer, Nigel Mills, says that is why they decided to intensify their focus on Northern Ireland.

He says: "Despite having excellent relations with the Ulster Historic Churches Trust we noticed that we were not getting many grant applications from Places of Worship in Northern Ireland and those applications we did get were not as strong as applications we were receiving from other parts of the country. To some degree this was because churches were not used to applying for grants but also conservation did not always appear to be a priority among the churches themselves."

He found that many churches were confused by 'ecclesiastical exemption', the mechanism whereby the individual denominations approve work on their listed buildings without external oversight.

"Some Places of Worship thought that ecclesiastical exemption meant no permissions had to be obtained, others saw permissions as a barrier to getting things done," says Nigel. "In addition, there seems to be a tradition in Northern Ireland of using someone to carry out a quick fix."

Nigel cites the example of Portaferry Presbyterian Church, Co Down, an imposing building in the style of a Greek Doric temple in the early 1840s and Grade A listed. Its custodians struggled to manage the upkeep of the large building and thought their only option was to close and board up the building. It was saved by a group of Friends who took ownership and in 2015 carried out a £1.5 million restoration assisted by several grants. It is now an arts and heritage centre called Portico, but is still used for worship by the local Presbyterian congregation.

The Presbyterian and Methodist traditions decline funding derived from gambling, so this rules out their accepting help from the National Lottery Heritage Fund, the biggest grant-giver in the sector. The NCT finds other sources for its grants to these denominations.

It was in 2018 that the Trust set up the Northern Ireland Places of Worship Forum in partnership with local heritage bodies including the Ulster Historic Churches Trust, the Historic Environment Division and the Institute of Historic Building Conservation.

Then came 'Treasure Ireland,' launched in 2020 and scheduled to run till 2023. It awards grants of between £500 and £10,000, supported by the National Lottery Heritage Fund, the Pilgrim Trust and the Department for Communities, Northern Ireland. (The photo at the top of this page shows the Church of the Immaculate Conception, Strabane which has received a 'Treasure Ireland' grant of £7,500 and £2,500 grant from the Wolfson Foundation, on the recommendation of the National Churches Trust).

Says Nigel: "At the start of our projects in Northern Ireland we had 12 people in focus groups. Now there are 500 plus churches we engage with on a regular basis. Compared with where we were it is quite staggering."

The NCT is also awarding Cornerstone grants of between £10,000 and £50,000. These are allocated towards the cost of major urgent structural repairs, and the installation of kitchens and toilets. The last round of Cornerstone Grants was bolstered by funds from the Department for Communities Covid-19 Heritage Support Programme.

Since April 2020, National Churches Trust Grants have funded work at 27 places of worship in Northern Ireland which is more than the previous three years put together.

Nina has found that people from different denominations have felt comfortable meeting from their own homes via Zoom. "There is warmth and openness in these forums and they have worked."

The House of Good

Another positive sign is the interest taken in the NCT's 'The House of Good' report published in November 2020 that highlights the important role played by places of worship in serving the most vulnerable in society.

"Pre-pandemic there weren't as many churches that organised foodbanks and food parcels. Over the last year we've seen more churches being active in providing help to local people," Nina says.

Churches are also welcoming visitors who have found out about them through the Trust's ExploreChurches website and during European Heritage Open Days, an annual celebration of architecture, history and culture that takes place in September. More churches and chapels in Northern Ireland are to be added to the ExploreChurches website. There will also be training available to help churches increase visitor and tourist numbers.

The hope is that Northern Ireland's rich faith heritage will be an additional draw for tourism particularly in the post-Covid era of the staycation.

Visitors are drawn to the countryside with its ancient graves and picturesque ruins, and especially the dramatic scenery of the North Antrim coast that featured in the television fantasy series, Game of Thrones.

The many sites associated with St Patrick and his disciples attract modern day pilgrims. These include Armagh, the ecclesiastical capital of the island, where Patrick reputedly built his first stone church in 445. Patrick, and the island's two other patron saints, Columba and Brigid, are believed to be buried in the historic graveyard at Down Cathedral, Downpatrick which declares itself "a place of pilgrimage, prayer and welcome for everyone."

As well as richly decorated churches such as the Catholic St Columba's Church Long Tower, Derry City, dating from 1783, there are beautiful, simple buildings in villages and open countryside. 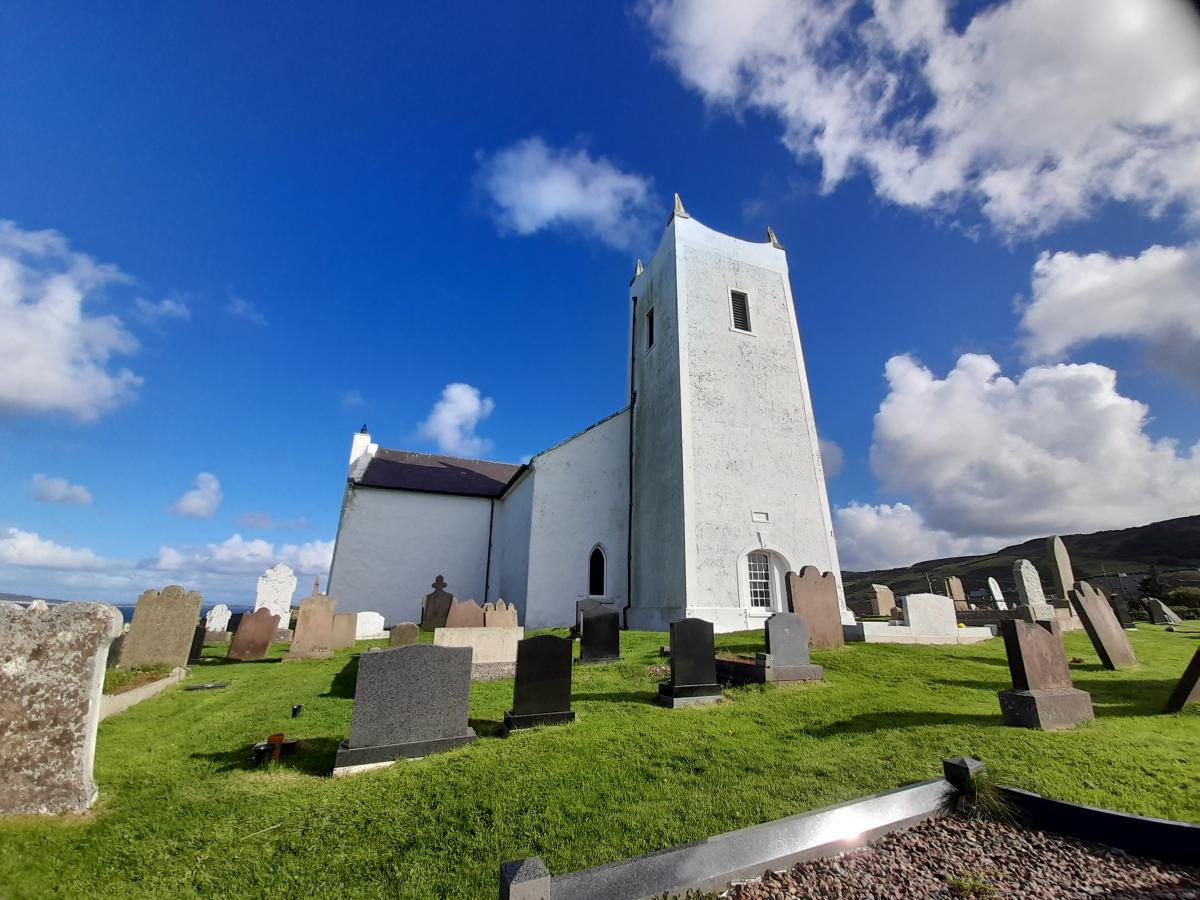 Nina McNeary singles out Ballintoy Church in Game of Thrones country (pictured left) which overlooks Ballintoy Harbour with views of the Scottish coast. The church has an unusual sundial used to record the movements of the tides, while inside a lovely stained glass window depicts St Patrick at nearby Slemish Mountain where, brought as a slave to Ireland, he lived as a shepherd.

A perennial attraction has been for people living in the United States and elsewhere to trace their Irish roots, with churches providing an essential role by assisting with access to historic parish registers as many Church records were lost during the Irish Civil War when the Four Courts were blown up in 1922.

Says Nina: "Our church story is different to that of anywhere else. We have denominational diversity, amazing ecclesiastical sites and so many different types of places of worship in beautiful settings."

The work being carried out to make sure that buildings are in a good state of repair and the desire to share their heritage bodes well for the future sustainability of the churches and chapels of Northern Ireland.

Find out more about our Treasure Ireland project and how it can help your church or chapel.

Feature written by Elena Curti for the National Churches Trust