The ‘great and good’ of society enjoyed the privilege of being commemorated within their parish churches.  It should be remembered that monuments do not necessarily mark the place of interment, which may be some distance away.

Monuments can provide a wealth of information concerning those remembered – wealth, fashion, their appearance, the way people lived, and how they hoped to be remembered.

From the beginning of the 13th century the image was often placed on a tomb chest and carved in the form of a three-dimensional effigy. 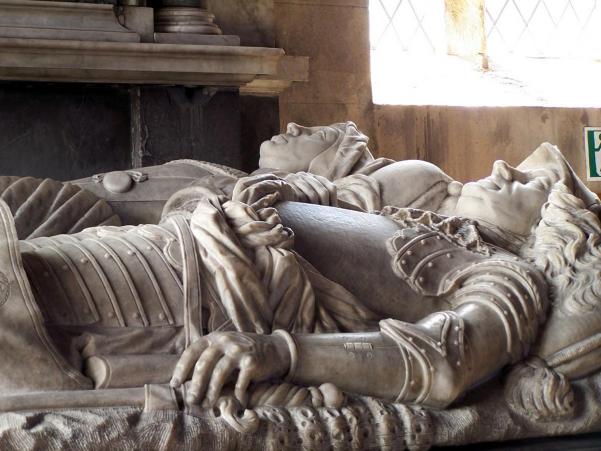 In 658, burials inside the church were sanctioned – this privilege was normally reserved for people of importance.

Some of the earliest remaining memorials are the lids to stone coffins in which people of high status were buried.

Many were marked only with a cross, whilst others had a symbol incised at the side of the cross denoting the rank, status or profession of the deceased.

The symbol of a broadsword would represent a knight, a chalice a priest, and shears or scissors the Lady of the manor.

During the 12th century, effigies began to appear in low relief - carved out of stone, alabaster or timber.

By the 13th century, the effigies were raised on tomb-style chests decorated with foliage, heraldry or architectural detailing.  Effigies of bishops and knights were common, and knights were shown in full armour.

An alternative to effigies was an engraved brass.

Cheaper than stone, brasses were actually made from latten - an alloy of copper and zinc.

During the 14th and 15th centuries, brasses of merchants began to appear alongside those of knights and lords.

Attempts at life-like portraiture did not exist, but fashions were portrayed with minute attention to detail.

There are around 4,000 brasses in churches around England, which has the best collection of brasses in the world.

From the mid-16th century, many monuments were secured to the wall and were called ‘hanging wall monuments’.

Modest versions of these are referred to as ‘wall tablets’ or ‘memorial tablets’.

They are stone panels in a variety of shapes with commemorative inscriptions.