Fergus Wessel loved letters from an early age, now he is a master of his craft carving grave stones and memorials from his studio in Oxfordshire.

Letters in stone, found on gravestones or commemorative plaques, give great pleasure. There is something beautiful about a well chiselled piece of marble or slate.

There are not many carvers in stone who can transform the fact of someone's arrival and departure into something special, unique.

The country’s churchyards have hundreds and thousands of memorial stones and one practitioner of the art is Fergus Wessel. A leading carver, he has built an impressive reputation for creating bespoke head stones and memorial plaques for private clients, who include Loyd Grosman, Alan Titchmarsh, and the Earl of Wemyss.

Fergus also completes hand carved commemorative and opening plaques, as well as heraldry, with royal and institutional commissions. These clients include The Royal Albert Hall and several Oxford University colleges.

Fergus was drawn to lettering at an early age, having been introduced to different type faces by his mother who worked as a typesetter at the publisher, Whittington Press. He went to Falmouth College of Art to study ceramics and was a studio potter at Winchcombe Pottery for seven years but couldn't shake his love of lettering.

Fergus was 22 when he decided to sign on as an apprentice carver at the Kindersley workshop in Cambridgeshire. After three years he graduated and set up his own carving studio in Oxfordshire, near Chipping Norton, and hasn't looked back.

Fergus explains, “I learned about, and loved the hot metal type. The type Caslon is now in my bones, also Goudy and Bell."   He adds that calligraphy works best on paper, whereas traditional typefaces translate well to slate.

Not a lot of people know about the process of hand carving on slate, marble, and limestone, but it is hard, slow and loving work with little room for error.

Fergus is a slate man: "Slate is crisp and clear, you can carve thin marks which makes the work so much more elegant. Limestone is good too but you have to carve slightly more chunky letterforms.”

He is not a fan of the popular "polished black" granite which you can spot in many graveyards. He comments, "The appeal of granite is that it is cheap and lasts forever, but it is unsubtle and has a harsh look. Happily quite a lot of people agree with this view now and they are prepared to pay more for something more refined and beautiful - like slate."

He likes headstones that mellow and get better with age, which is not something that granite does. He explains, "If someone wants a carved headstone to stay readable the carver must chisel deep and bold. This is what carvers did 200 years ago." 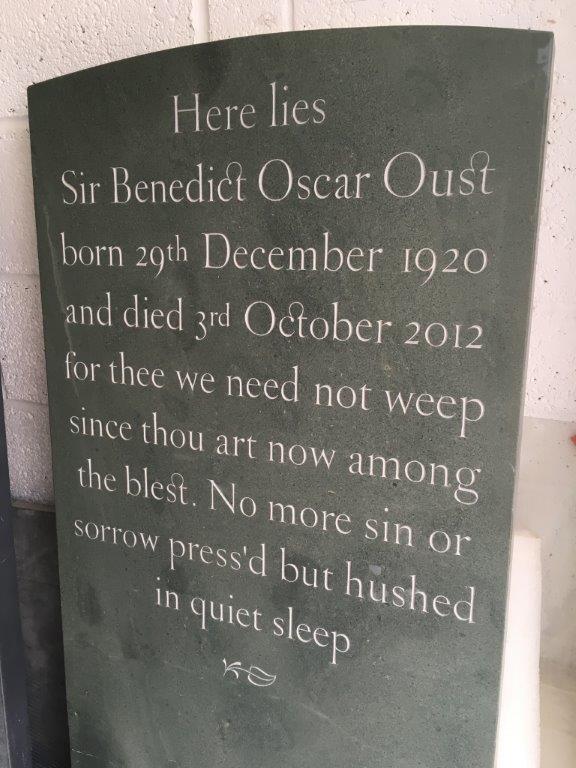 “I was in a churchyard in Lincolnshire the other day and all the words on the 18th-century slate tombstones were quite readable. Legibility for hundreds of years is quite possible if the letters are well done."

"We give clients lots of time when choosing the headstone for themselves or a loved one so they can choose what is to be written on it.  They often need time because obviously, they want to get it right."

"We encourage people not to consider having overused phrases on the memorial like in loving memory or in treasured memory. You want something that will still seem relevant after twenty years, that's why we often suggest poetry which can work well."

So many skilled crafts, like stone carving, wood carving, calligraphy, stone masonry and the like are not considered a reliable way to make a living. However, Fergus says that there is plenty of work for carvers these days as more people want something unique for their headstone.

His clients wait for around a year to eighteen months to have a commission completed, but Fergus says he wouldn't want to expand the workshop too much as it would lose its personal approach.

Every potential consumer wants to know a ballpark figure for what a bespoke headstone might actually cost. As a rough guide, anyone wanting a bespoke headstone would probably expect to pay a minimum of around £2,000 up to £10,000 plus VAT and upwards, depending on how elaborate, big and time-consuming the undertaking was.

It's possible that the privately commissioned gravestones and cremation memorials will receive a boost in demand because the 'golden generation', the post-war baby boomers, are now elderly.

But Fergus counters, "Don't forget more and more people are choosing cremation and also ‘natural’ burial grounds are becoming more mainstream, so presumably, a big percentage of the baby boomers will choose this route too."

Fergus still loves to carve, but with greater experience, he finds he gets more out of teaching the art and inspiring his trainees than ever before. He is obviously a good and dedicated craftsman and his sympathetic manner makes him well suited to handling clients in this emotionally delicate work. 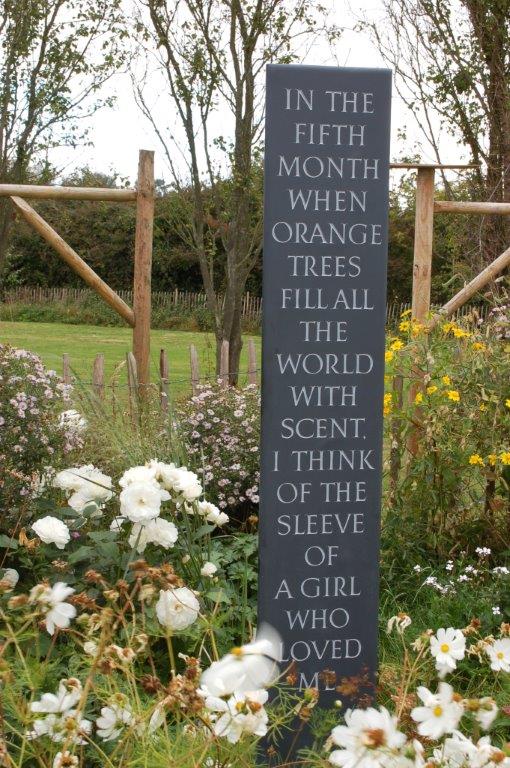 If they are aesthetic, memorials can enhance a special place of rememberance

Choosing and creating a headstone needs to be approached in a sympathetic and unhurried way, so that while the memorial itself is a lasting tribute which will bring comfort, the process itself can be special, and can be an important part of the path of healing and acceptance

Fergus and his wife Hannah are writing a book about choosing a headstone, which will feature over 150 images of inspiring headstones. He is hoping to sell the book on his website to raise money for a cancer charity.

He explains, "We see many bereaved families who have lost loved ones to cancer, so it will be wonderful to raise funds to help those suffering from cancer".