The shortlist has been announced for the 2019 Presidents' Award, run by the Ecclesiastical Architects and Surveyors Association and the National Churches Trust.

Seven entries have been shortisted:

Photographs and more details can be found below and there is also more information about the churches on our ExploreChurches website.

The architects and the schemes judged to be the winners in each of the two categories will be announced by HRH The Duke of Gloucester KG GCVO ARIBA at an awards ceremony at St Mary Magdalene Church, Paddington on Thursday 31 October 2019. Also at the Awards Ceremony, Prince Nicholas von Preussen will announce the 2019 winner of the King of Prussia Gold Medal for church repair and conservation architecture.

The Presidents’ Award is awarded on behalf of the Ecclesiastical Architects and Surveyors Association President and the National Churches Trust’s Joint Presidents, the Archbishops of Canterbury and York. Projects are eligible if they have been completed within the last three years or after the Practical Completion stage in their development. New church buildings and new designs in church re-ordering, alterations or extensions are eligible for The Presidents’ Award. The award is open to church buildings of all Christian denominations in the UK.

The award comprises a chalice and paten, commissioned by the Incorporated Church Building Society, and made after World War II, originally to be loaned to a new or seriously war damaged church. The winning church will receive a £500 prize.

In selecting the winning entries, judges will be considering the following criteria.

•    Innovation, invention and originality
•    Fitness for use as a church, or part of a church building, in the 21st century
•    Does the work have the potential to bring new life to the church?
•    Architectural quality
•    Sensitivity to context
•    Elegance of construction and detail

Judges are also asked to consider to what extent the design is environmentally responsible.

Judges for the Ecclesiastical Architects and Surveyors Association

Judges for the National Churches Trust

The 2019  shortlisted entries are listed below

Bethnal Green Mission Church (BGMC) forms the heart of an elegant new urban block, which includes a community centre and café alongside 14 apartments. The church itself is a double height volume, with a stepped section that creates discrete side aisles. The ceiling is defined by diagonal ribs of in-situ concrete, referencing the tradition of vaulted church ceiling.

The building replaces a 1950’s structure with severe maintenance issues and accessibility challenges. The new community spaces borrow daylight and volume through overlapping sections to generate generous, light flooded spaces despite a complex brief and tight site. They enable the church (directly and in partnership with others) to continue their tradition of serving the community, where they support a wide range of groups including the homeless, trafficked women, disadvantaged youth and interfaith work. 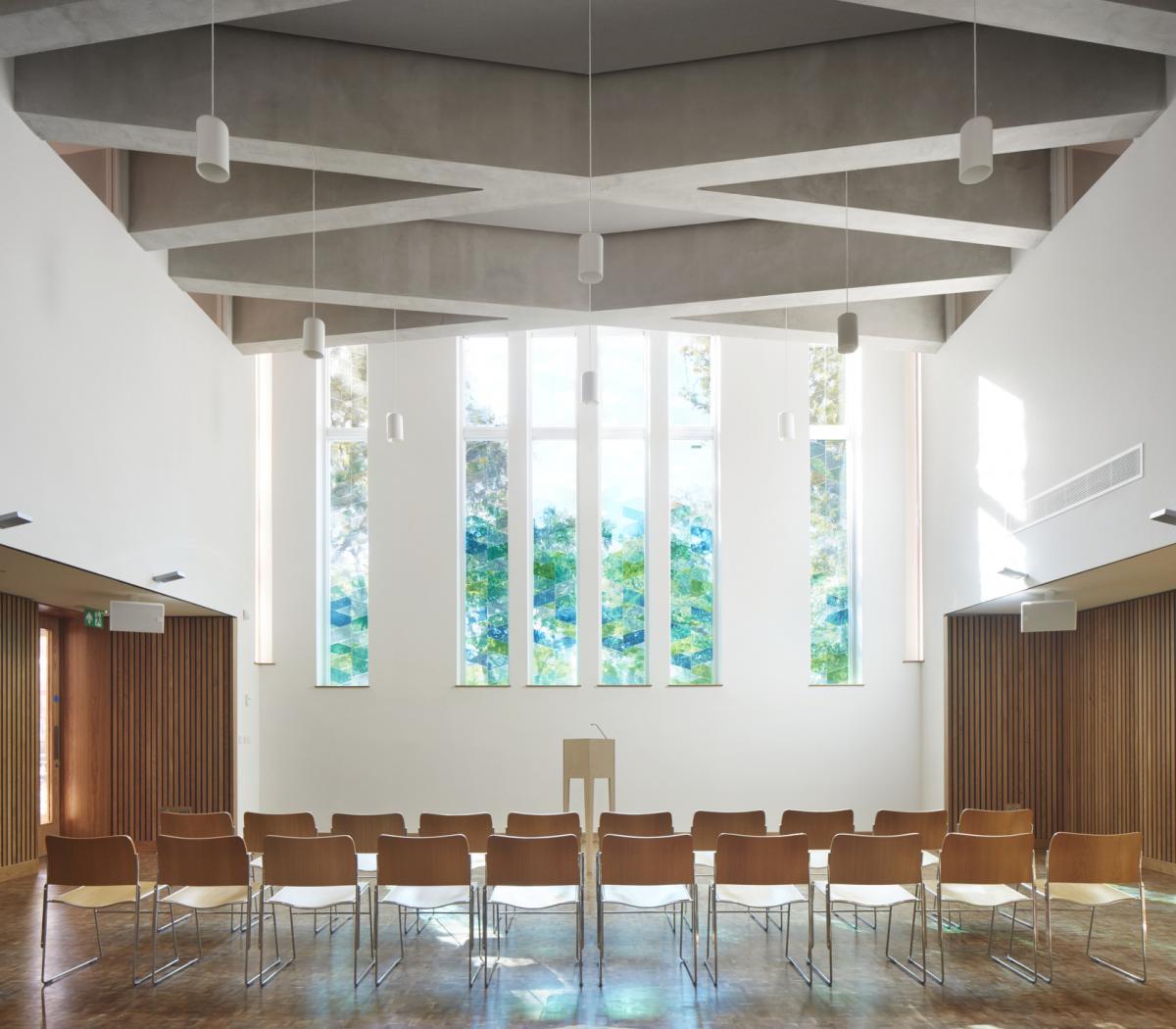 In 2012, the vicar approached Sheppard Architects for ideas about improving the building. He had identified the need to repair and restore this Grade II listed church and to adapt, improve and extend it to meet the usual needs of a 21st century church It was recognized that all could not be achieved in one go and a phased approach was adopted.

Phase 3 – The east end interior 2017. The church has close links with the local school who use it for weekly assemblies and many concerts and events. The church also has a strong music tradition and hosted many other concerts. The existing space under the nave now accommodate a new electrical/mechanical rising stage.

Phase 5 – Completion of the interior restoration 2018 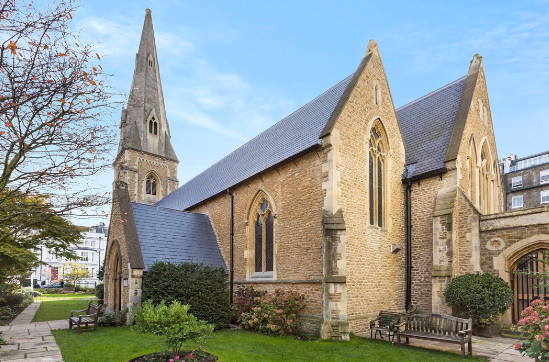 The regeneration of this Grade I listed Christopher Wren church has created a more serene, welcoming, and numinous space for worship. The building was heavily damaged in the war and the rebuilt interior was in need of consolidation and refocusing. This includes creating a west to east movement from water to light, birth to death and rebirth, and genesis to revelation. A quiet baptistery at the west end creates a setting for the baptismal font. The main feature is a geometric stone floor that takes its pattern from some of Wren’s early mathematical works.

We mark the east end with a gilt brass tabernacle and a setting for the high altar. In contrast to the circular designs of the baptistery, the tabernacle forms a series of nested cubes. In the north aisle a Lady Chapel has been created, taking inspiration from Mary Star of the Sea. A large brass reredos and perforated side screens create a quiet space of contemplation and reflection. 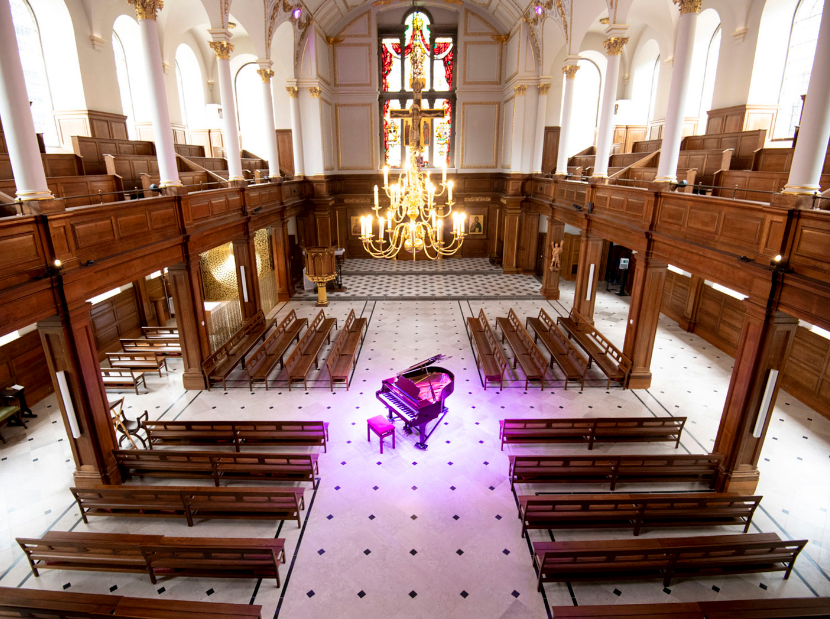 A project to re-order, re-use, and adapt a family of buildings on a congested site in West London. The project includes the restoration of the existing historic church and priory (1914-1916) and the erection of a new Augustinian Centre. The first phase of the project was to restore and refurbish the Edwardian church. Precise interventions like the reorganisation of the sanctuary with a reclaimed green marble floor and a cast iron light fitting lend a new spiritual and emotional identity to the congregation. New sacred spaces include confessionals and a re-ordered sanctuary, as well as items such as new lecterns, candle stands and a tabernacle. The collaboration between art and architecture has been a strong theme within the project. 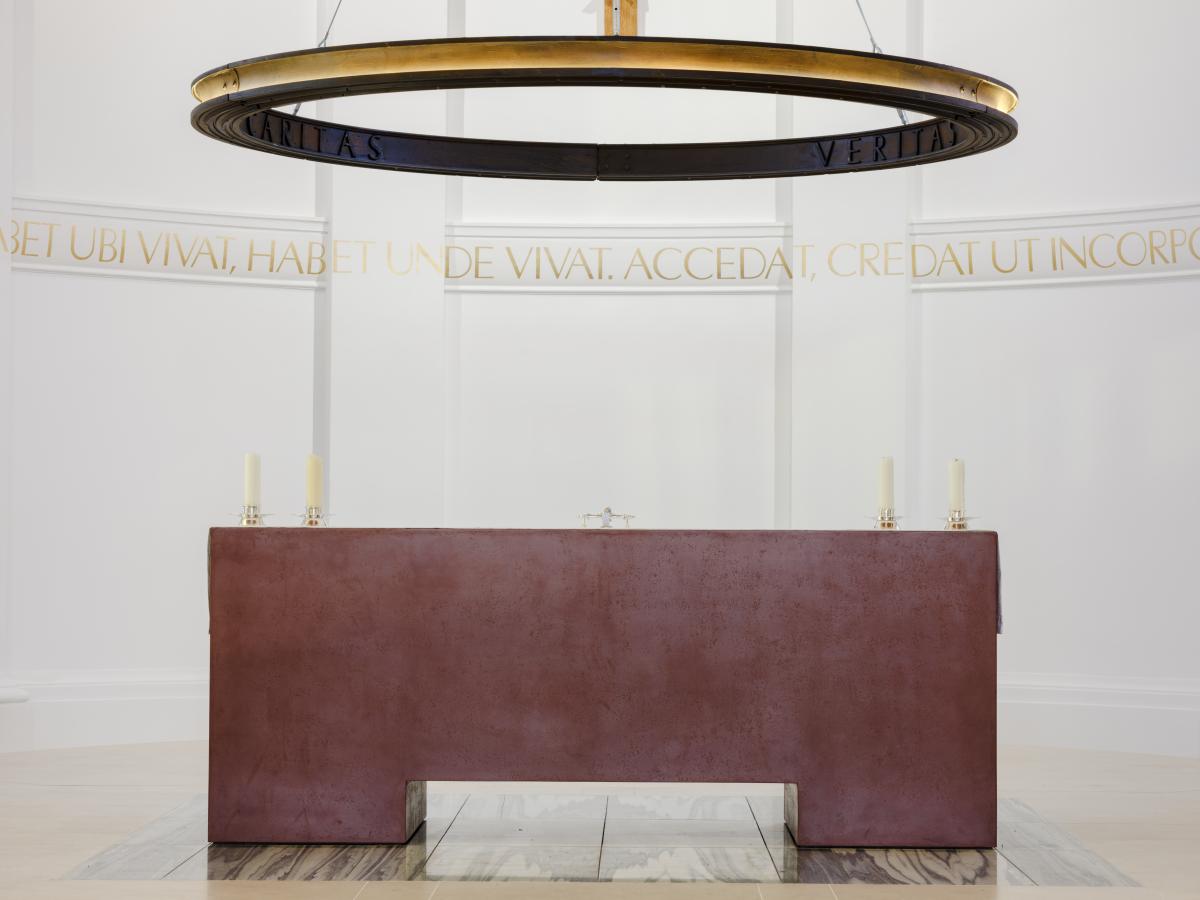 This project has created a new arts and community centre for this Grade I Listed Victorian church and opened the building up to the community for wider uses. The new building contains a café and education room as well as WCs and staff offices, and brings access to the refurbished undercroft too. The challenge for the new building was for it to not be mistaken as an extension of the existing church, to be inviting to people who might find the architectural language of the church forbidding, and at the same time to have an appropriately responsive architectural language. It is greatly influenced by the original church but has its own clear identity. 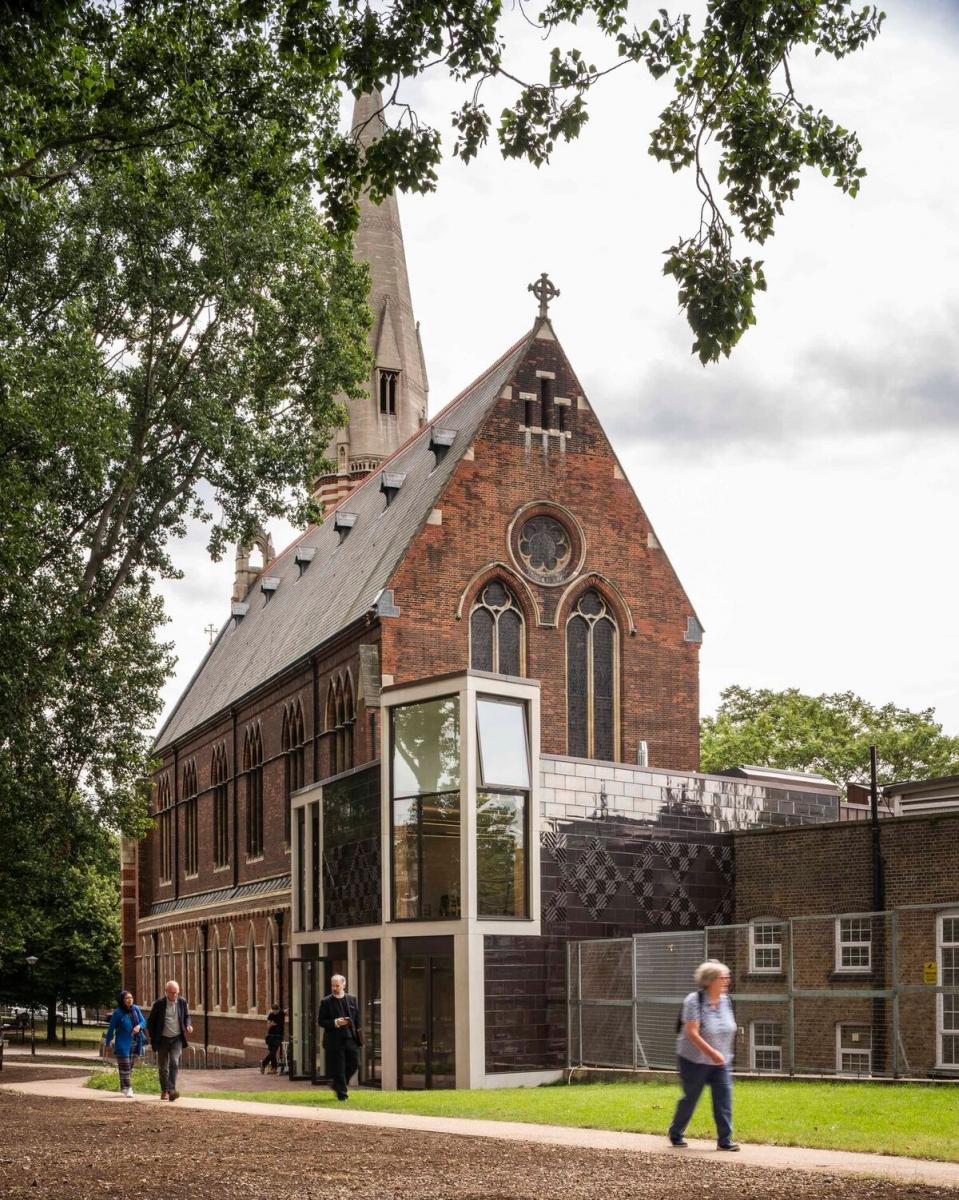 The church of St Nicholas in Great Wilbraham is a Grade II* listed 12th century Anglican church. The original building was remodelled by the Knights Templar in the 13th century in a cruciform plan and the west tower was added in the 15th century. A new WC and kitchen were installed in the base of the tower to enable the church to cater for a wider range of community activities. A new Ringing Gallery was installed above this, reinstating a gallery removed by the Victorians, accessed by a stair in the nave. 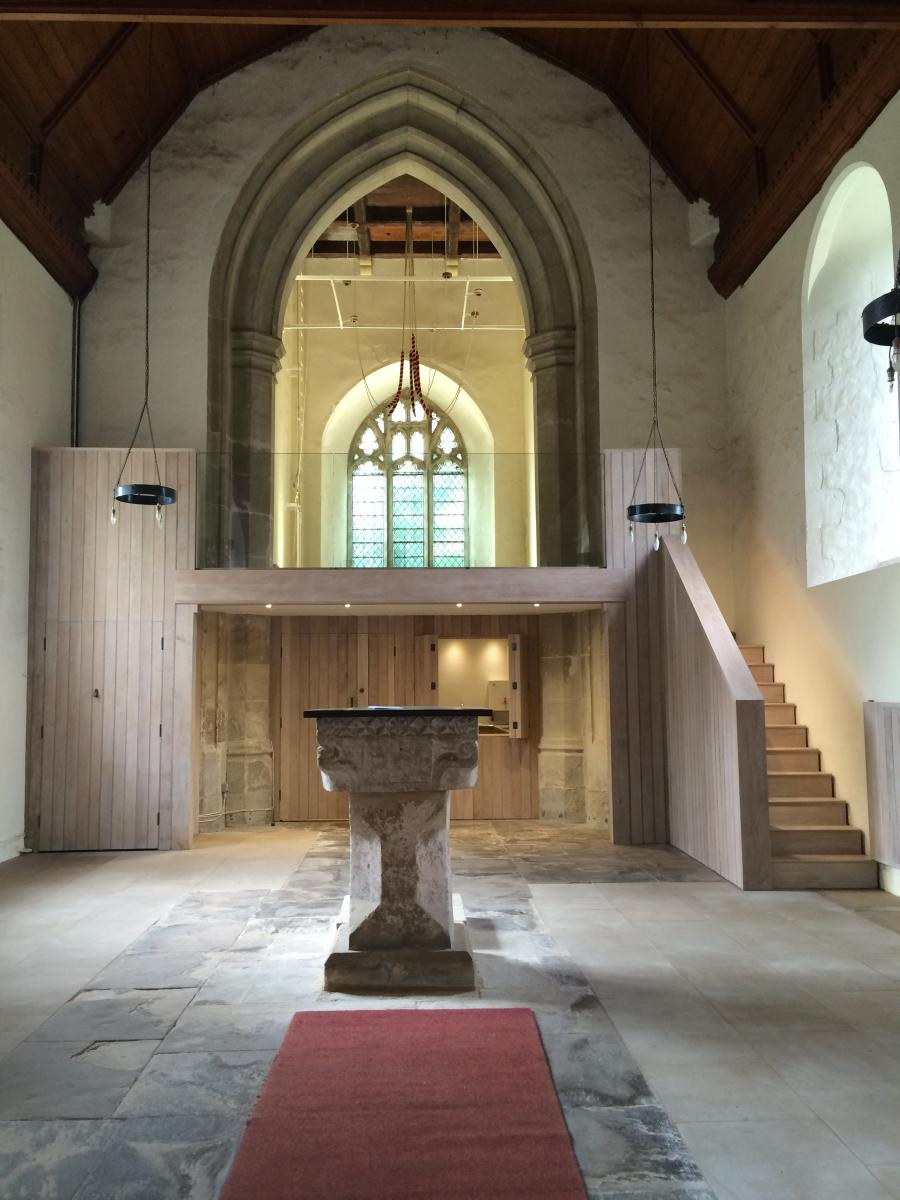 The simple brief for the project was to provide much-needed meeting spaces, WC and catering facilities in an extension to the church. This was a great challenge given the bucolic setting of the Georgian Church which hasn’t changed significantly since it was shown in Turner’s view from Richmond Hill of 1820. The only feasible site, preserving key views of the Church, was a space between the end of the south transept and a house on the churchyard boundary.

A gap between the church and the new building, connected by a minimal glass link, forms a sliver of outdoor courtyard for the new parish room and retains visibility and breathing space to the transept windows. The single new window facing the churchyard is screened with triangular honeycomb tiles to minimise the sense of overlooking. The entrance, into the glass link, is covered with a pierced metal screen bearing the words ‘All Are Welcome’. When in use it folds back to reveal the entry door. The new building provides a wheelchair accessible WC and, crucially, disabled access to the church down a gentle ramp. 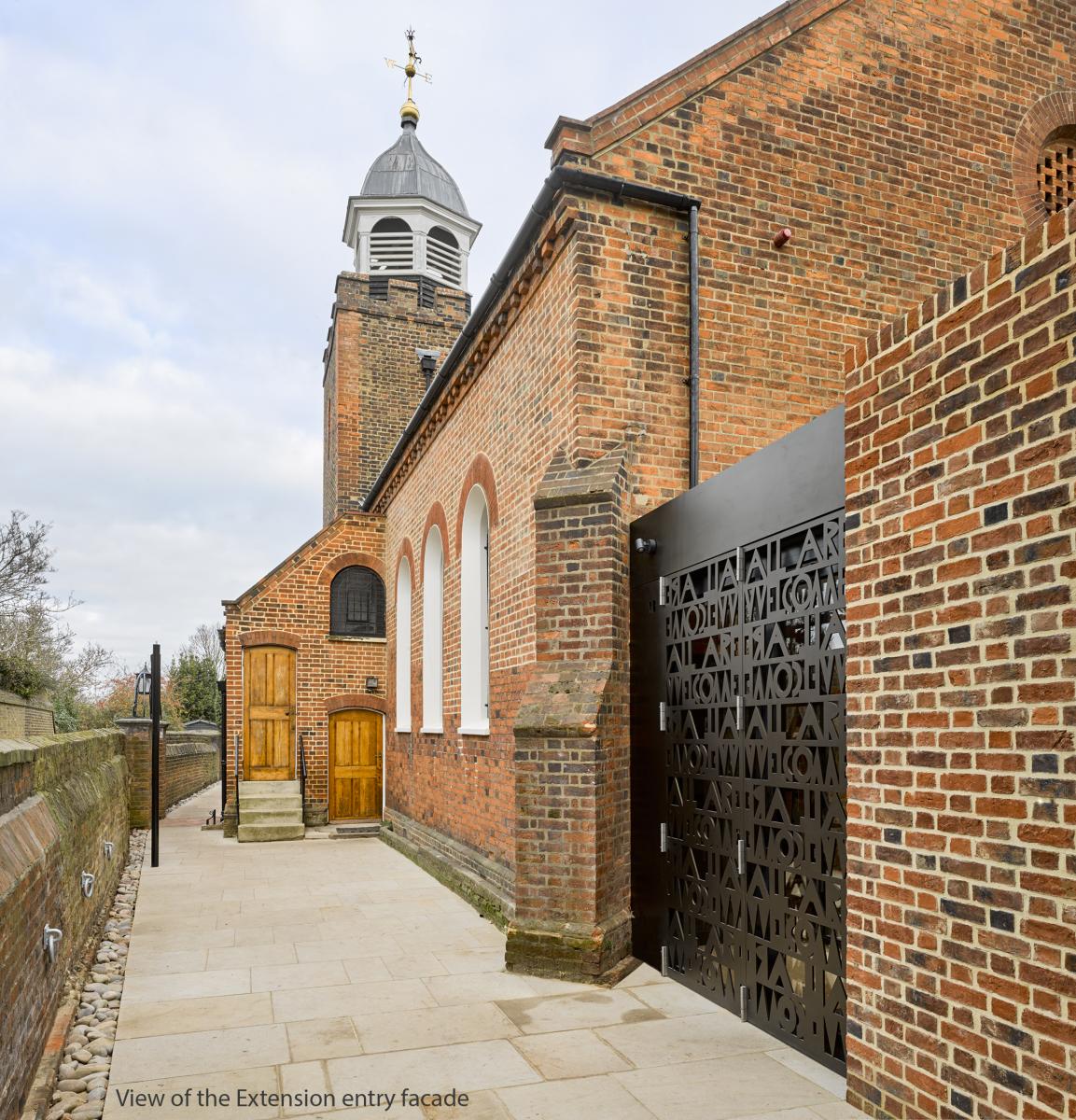 Photos from all shortlisted projects here