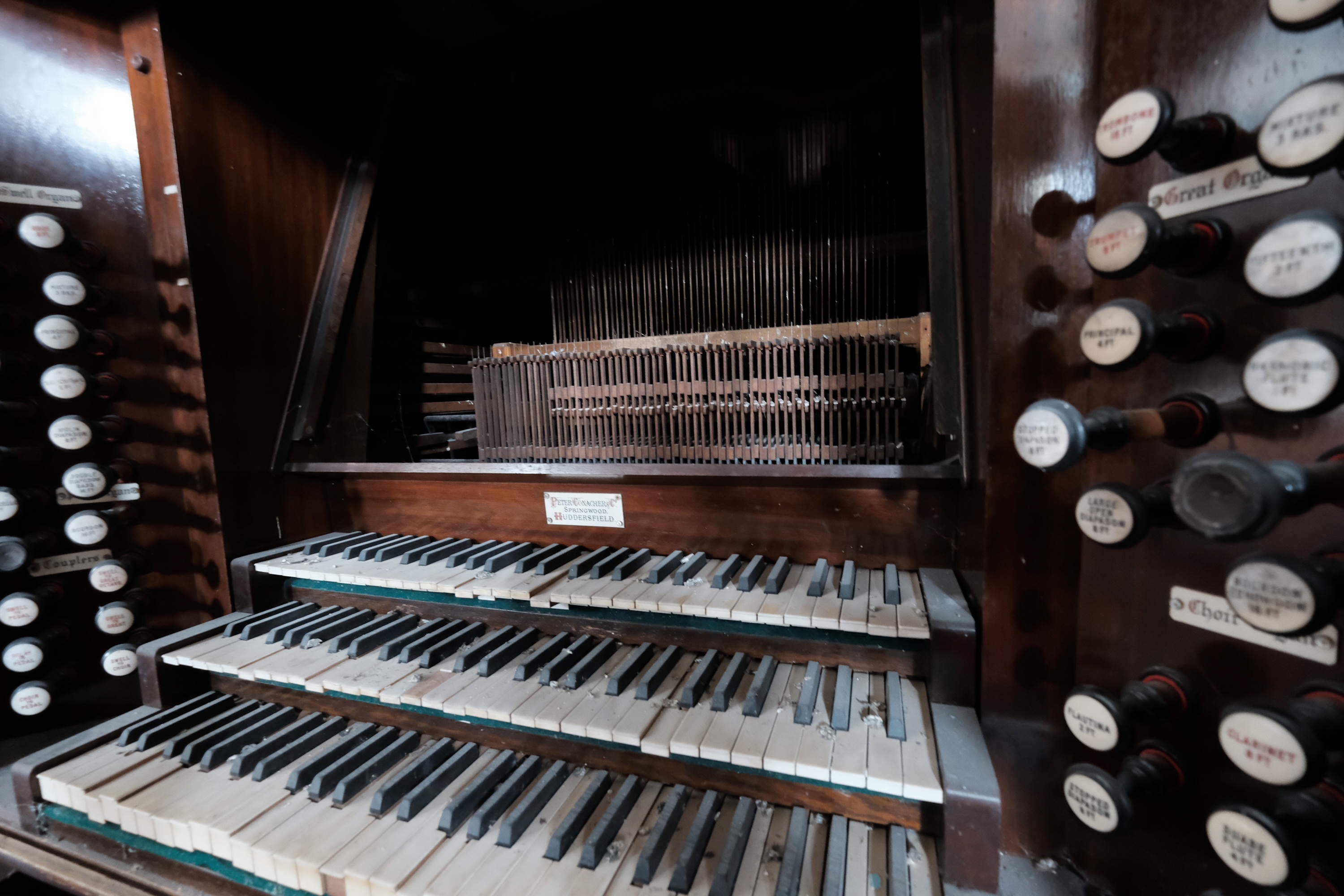 Writing in the Trust's 2020- 2021 Annual Review, published on Saturday 31 July 2021,  broadcaster and journalist Huw Edwards, Vice-President of the National Churches Trust, has called for action to safeguard the UK's church and chapel organs.

You can discover the UK's church and chapel organs on our ExploreChurches website.

The full article can be read below:

A few years ago, I ventured into an abandoned chapel in Caernarfon. Engedi, a Welsh Presbyterian chapel which closed its doors in the 1980s, is a place frozen in time. The rich plasterwork ceiling is still there – with its mouldings and ornate roses in dazzling azure and white – as are the grand pulpit and elders' seat which face ranks of pews caked in thick layers of bird droppings. The eyes are then drawn to the richly-decorated pipes of a Victorian organ, their style immediately recognisable to any enthusiast as the work of Peter Conacher of Huddersfield.

It was clearly an impressive instrument in its day, but any effort made to save it – since the chapel closed – has clearly failed miserably. The pipe facade is all that remains. The three-manual console with its mahogany casework has been ripped apart, the soundboards and ranks of pipes torn out.

A salvage exercise by an organ builder looking for spare parts? Not remotely. It's just another familiar case of vandalism in disused chapels and churches across the United Kingdom. Pipe organs are favourite targets for vandals . And even when they're not vandalised, most are left to rot and fall apart. They are seen as worthless boxes of pipes, relics of a despised age when organised worship was central to the life of the community.

Why bother with these old instruments? They are, after all, discarded objects in discarded buildings. If the buildings are left to rot – for a range of reasons, including a lack of local interest – why should others care?

The truth is this. Just as some church or chapel buildings are notable for historic or cultural or architectural reasons, so, equally, are parts of the fabric of those very buildings. And just as many of our religious buildings were built with the pennies of the poor, so, equally, were some of the handsome instruments installed to enhance the music and the quality of the congregational singing in particular.

Some of these pipe organs were modest in size but exquisite in design. Some were much more ambitious in scale, designed by experts to world-class standards. The installation of high-quality organs in villages, towns and cities throughout Britain is truly one of Britain's cultural glories.

For some years, this rich heritage has been casually thrown away as places of worship close and the contents are stripped for cash. That process has now gathered momentum as the rate of closure of chapels and churches has soared.

I learned to play the organ from the age of 16. My piano teacher, Idris Griffiths, was an excellent organist who refused to introduce me to the organ until I had passed my Grade 6 piano. My greatest mistake was not switching entirely to the organ at that point. I kept my focus on the piano and squeezed in some organ lessons when I could. I regret that decision to this day, but I have still enjoyed playing the organ over the years.

My interest in technique has intensified, and the wonders of YouTube have allowed me to see as well as hear some of the great organists at work. There is a truly stupendous film of the great Karl Richter playing (entirely from memory!) the Bach Passacaglia and Fugue in C Minor BWV 582 – I have probably watched this more than a hundred times and never get tired of watching his sublime pedal technique and his mind-boggling keyboard skills. It really is a case of a genius performing the work of an even greater genius

The chapel where I learned to play in Llanelli was demolished in 1998 – complete with a lovely two-manual Nicholson pipe organ and the minister's excellent library – without the slightest note of concern from local authorities. A few remnants were rescued – some chairs from the elders' seat, for example, and a bilingual New Testament used for Communion services, now in my possession – but the place was bulldozed with little thought given to the treasures within.

This is a horribly familiar story. During the 1960s, some local authorities in the valleys of South Wales engaged in what one historian called 'officially-sanctioned vandalism' as they blessed the demolition of dozens of chapels every year. Many disappeared without the commissioning of a basic photographic survey to preserve some kind of record of what had been.

Before we get too depressed, let's praise the few heroic individuals – Martin Renshaw springs to mind – striving to save instruments, often helping to transfer them to churches in the European Union where the demand for good pipe organs is actually on the rise. But the scale of the British problem is too much for solo operations. A credible strategy is needed to identify the most important instruments at risk – the criteria are fairly easy to specify – and to find them new homes, or at least safe storage until a new home can be found.

Don't be deflected by the ignorance or indifference of others. This is a vitally important part of our cultural story. These church and chapel organs are a direct link with previous generations – our ancestors – whose cultural values and priorities are reflected in the buildings they funded. They are a musical window into a very different world.

A strategy – probably on a devolved basis given the cultural responsibilities – would at least safeguard the organs in a state of decay right now, making some of them available for future generations to enjoy. A pipe dream? Maybe. But the time to act is now, before we lose so much more.