A Norman gem on the English Heritage 'At Risk' Register, St John the Baptist church in Kingston Lisle, Oxfordshire, will soon be starting a major restoration project, with funding support from the National Churches Trust.

In its latest round of Grant Awards in December 2014, the National Churches Trust was proud to support St John the Baptist church in Kingston Lisle,  with a £20,000 Repair Grant to help fund repairs to the roof, bellcote and porch – vital work which will protect and preserve this ancient and inspirational building for future generations.

An answer to Pagan worship

Grade II* Listed, St John the Baptist church dates back to the 12th century, and was allegedly founded in response to Pagan worship on the nearby White Horse Hill. Unusually, its interior was left largely untouched by the Victorians, and as a result it boasts rare 14th century wall paintings depicting Peter, Paul, Herod and Salomé (with the Baptist's head on a platter), beautiful medieval stained glass, and exceptional 15th to 17th century woodwork, including fine bench ends, panelling, pulpit and rood screen.

The English Heritage 'At Risk' Register

Sadly, despite this treasure trove of heritage St John the Baptist church fell into such a poor state of repair that it was placed on the English Heritage' At Risk' Register, and even faced imminent closure. Fortunately, in response the local community rallied around to save their beautiful local landmark: the congregation has more than doubled to its highest levels in 30 years, and a new village choir has been formed to perform at services.

With such devoted local support behind it, the National Churches Trust supported St John the Baptist with a £20,000 National Churches Trust Repair Grant. Churchwarden Angus Saer reports that this was the largest grant that the church had received after that of the Heritage Lottery Fund, and as such played a crucial role in getting their project off the ground.

Spurred on by our support, the team went on to reach their final fundraising target; securing 12 grants, 12 donations, and many pledges within the village, and raising significant income from a quiz evening and  a 'Sponsor a Tile' programme. This means that they will soon be going out to tender for the works, with the aim of carrying them out between April and October 2015.

Please help us to care for more churches like St John the Baptist church in Kingston Lisle, by becoming a Friend of the National Churches Trust

The National Churches Trust relies solely on the generosity of our supporters to fund our work. Last year we helped to rescue over 140 churches, chapels and meeting houses with grants totally close to £1.5m, but sadly we currently receive far more requests for help than we can possibly answer, and are forced to turn down three out of every four places of worship that apply for a grant.

The good news is that there are many ways in which you can help us to help churches; by becoming a friend, making a donation, or leaving a legacy in your will. Find out more about how you can support our work and Britain’s churches. 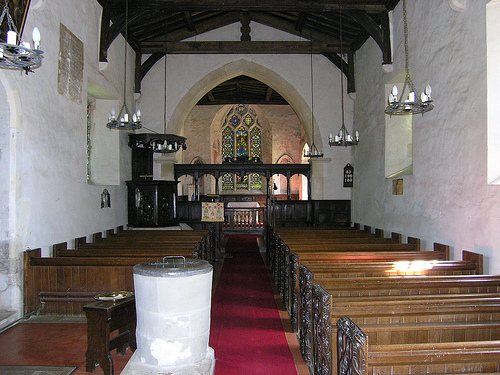