The National Churches Trust works with church buildings across the United Kingdom. We have been working to increase the support we give to churches, chapels, and meeting houses in Northern Ireland.

At the end of March 2017, Michael Murray, Director of Church Support, and Nigel Mills, Grants and Development Officer, travelled to Northern Ireland to host a one-day conference with the Ulster Historic Churches Trust, and visit some of some National Churches Trust supported churches.

Having successfully negotiated the short flight across the Irish Sea our intrepid travellers were intrigued to find that their hire car was a delightful shade of episcopal purple which meant they were sure to be noticed as they criss-crossed through the Northern Ireland countryside.

Church of the Holy and Undivided Trinity

The first stop was the Church of the Holy and Undivided Trinity in Magheralin. The National Churches Trust funded this 19th century Grade B+ (equivalent to II*) church in 2013. A £40,000 cornerstone grant helped them tackle water penetration in the walls and roofs.

It was a pleasure to be shown around such a well maintained church and to learn about what they had been able to do since the work was completed – including a spectacular display of wedding dresses which attracted national publicity and over 7,000 visitors! It was also really good to hear about their plans and vision for the future which is all about making the church more accessible and useable throughout the week. 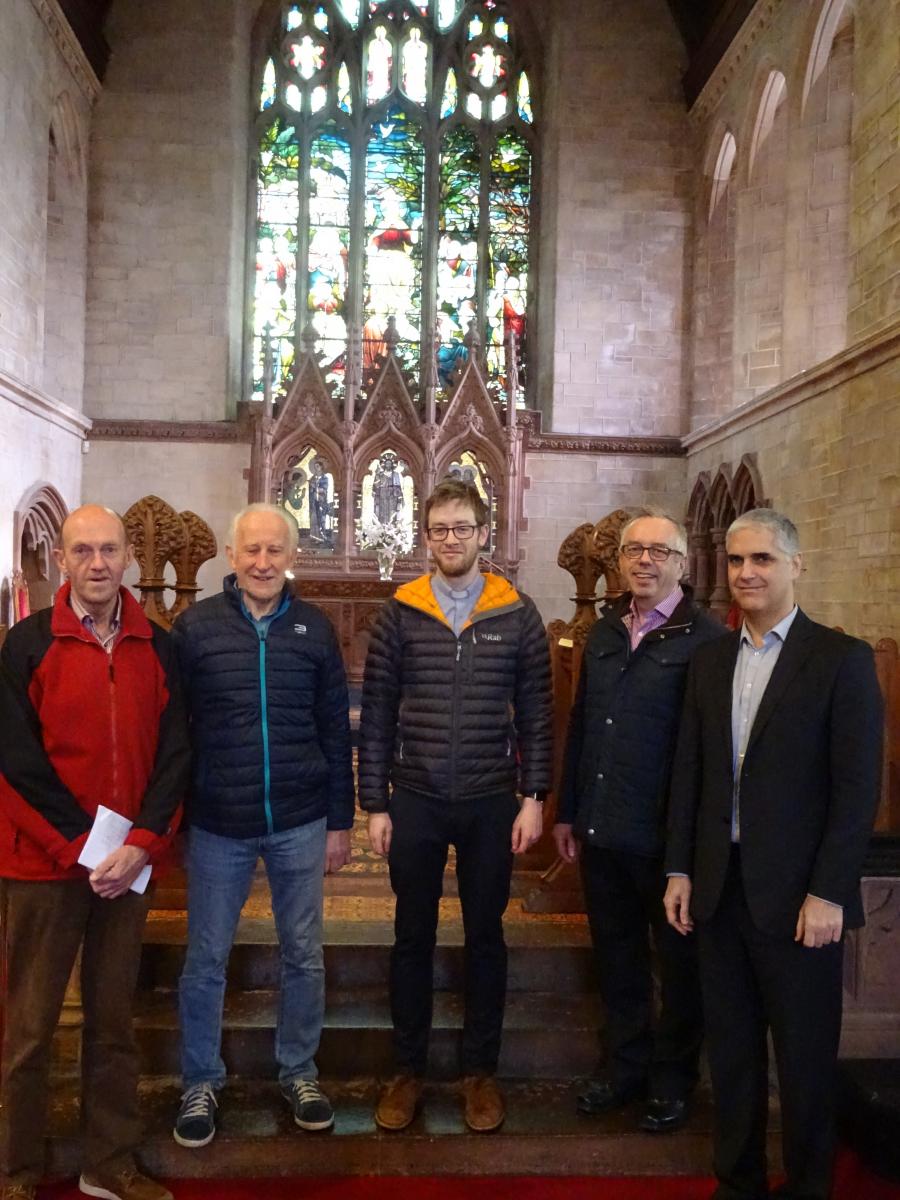 A working lunch provided Michael and Nigel an opportunity to meet up with Jennifer Stutt, Chair of the Ulster Historic Churches Trust, and fellow Trustee Jill Kerry. It was good to catch up on the pilot of the Northern Ireland Maintenance Project, which the National Churches Trust had helped to get off the ground, and to talk through how we can work together to encourage and support churches across Northern Ireland in pro-active maintenance.

The afternoon visit was to the Second Killyleagh Presbyterian Church. The National Churches Trust awarded a grant of £20,000 in 2015 to this Grade B1 listed church to address some repair issues and to open the church up. You could really see the difference the project had made - transforming the church into a more welcoming accessible space and enabling the hall and the church to be used in conjunction with one another whilst maintaining the character and essence of the original building.

Michael and I were shown around by Robert McMurray and Jim Lindsay who were obviously very passionate about their church but far too modest. One of the aspirations in the original application was to use the National Churches Trust-funded project to grow daytime activities – when asked how this had gone they said not very well. It then transpired as the meeting went on that actually they have at least one new group using the building every day of the week as well as establishing a Foodbank!

The day was rounded off with a meeting with the Heritage Lottery Fund (HLF) at a National Trust Property - the famous and beautiful Crown Bar in Belfast - to talk through some of the proposed changes to the HLF’s grant programmes. 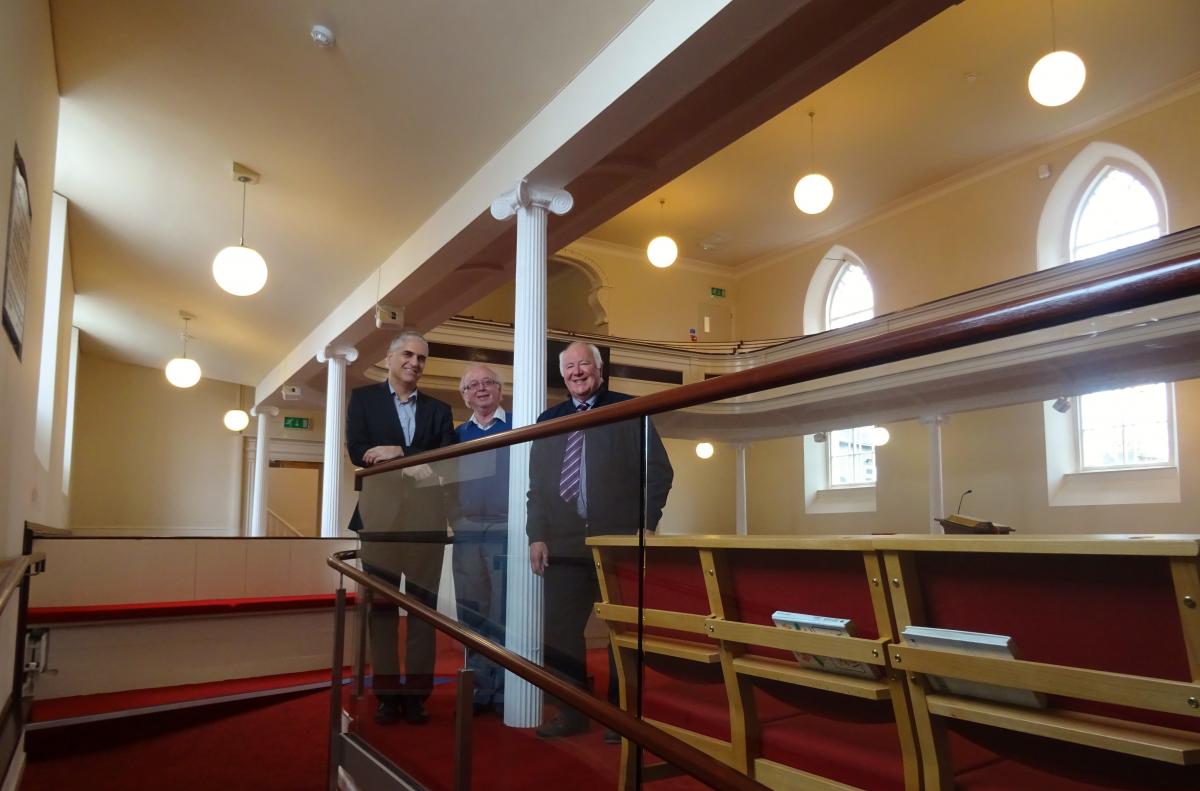 Bidding For Success with the Heritage Lottery Fund

Day 2 was Conference Day! The venue was the Moravian Church in Gracehill, Ballymena - another National Churches Trust funded church, and another example of what can be achieved if passionate individuals are given the resource to fulfil their vision. The National Churches Trust provided a grant of £10,000 in 2010 to help preserve the important and significant features of the 18th Century church situated at the heart of Northern Ireland’s first Conservation Area.

This wonderful venue was packed to the rafters with representatives from churches all over Northern Ireland. Delegates were taken through a variety of sessions which explored the value of proactive maintenance; the use of modern technology (including a live drone demonstration despite the weather’s best efforts to sabotage it!); the launch of the Northern Ireland Maintenance Pilot; and National Churches Trust funding programmes including the launch of the new Northern Ireland Partnership Grant Scheme. The day ended with a session from the HLF which included the grants schemes as they stand now, the changes to be made in the near future and what makes a good grant application.

"The trip to Northern Ireland was extremely worthwhile but two days was just not long enough. The churches in Northern Ireland were welcoming and enthusiastic and doing some fantastic work; the partnership with Ulster Historic Churches Trust is going from strength to strength and there are lots of exciting opportunities to work together in the future."

"The turnout for the Conference shows that there is a huge demand for what we do. We will see how the Pilot Projects roll out during 2017 and hopefully we will be able to visit again very soon."