It is said that all architecture has its origins in religion. 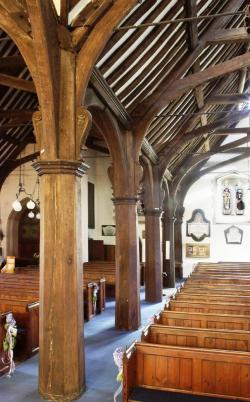 Most of the oldest structures erected by man are interpreted as being places of burial and as holy places.

The first hunter/gatherers set up large standing stones as they roamed the countryside, even though they had no permanent dwellings. With agriculture came the need for permanent homes. Sacred areas were surrounded by stone circles.

So when the first permanent dwellings were built by man, they built even more substantial homes for their gods. With the coming of Christianity and permanent churches, the same principal applied. The splendid medieval churches we now see were surrounded by crude wood and thatch dwellings.

In today’s multi-cultural Britain there are a variety of places of worship. Each is unique and worth visiting.

The development of an ancient parish church

An ancient parish church has usually undergone a series of redevelopments through the centuries, to take account of new architectural styles, growing congregations and necessary repairs. The evolution of old churches can be estimated from the style of arches, doorways and windows, as these features were most commonly changed.

The oldest surviving parish church in England is St Martin’s in Canterbury, and dates to about 590AD.

Since the 1500's, the principal parts of an ancient church have usually remained basically unaltered. Stonework weathered over the centuries may have been replaced, and in some cases vestries have been attached, but essentially the structure is the same.

A picture speaks a thousand words

The Centre for Christianity and Culture at the University of York has produced a series of fascinating interactive DVDRoms exploring the history and heritage of parish churches, cathedrals, pilgrimage and much more. If you want to understand the history of places of worship, and explore their features and treasures in depth, these resources are a great place to start.