Few atheists can have spent quite so much time in church as I have.

Perhaps I prove the point that some people try to make about a latent spirituality in even the most Godless of beings. For me the physical presence of a church is a symbol of the permanency of the culture in which I live, and choose to live. They may have been designed and built as places of worship, but to me they are far more than that. They are a symbol of part of what defines me as an  Englishman.

Throughout the country, local church trusts and national charities and funding bodies do much to ensure the good repair of England’s historic churches. Yet, I fear that in the decades to come, the task of maintaining these ancient buildings is likely to become overwhelming.

Some years ago I had a conversation with a lottery fund  administrator. She told me something then that profoundly shocked me, but which in the ten or  so years since I had the conversation has, as I have reflected on it, come to seem to me to be the  only way out of the problem we face in keeping our historic and magnificent churches standing.

It is to nationalise them.

I was shocked when I heard this for two reasons. First, I am against nationalising anything, on principle. Anything commercial always works better when it is in the private sector. If old Marxists among you doubt this, think of the days when the state telephone company took six months to install a line.

However, church buildings are not commercial. You can perhaps get a rent for them for the odd non religious function, and you can gather fees for weddings and funerals, but we all know how few parsnips that will butter. Church buildings are, however, one of the major cultural resources of our nation. Is any government, in even the most cash-strapped times, simply going to stand by and watch them crumble?

I think not, even though so many of our politicians are utter philistines.

There is no way the Church of England can afford to meet the repair obligations for the fabric of its churches: but in any case such repairs are not the church commissioners’ responsibility. Responsibility for maintaining these precious buildings rests with the incumbent and the parochial church council. 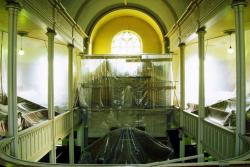 The most recent figures I could find suggest that only around £112m of the £185m annually  needed is actually raised and spent: so £73m worth of much-needed repairs and maintenance are not being done each year, causing buildings to deteriorate and making their eventual repair – or perhaps it is fairer to say rescue  – even more expensive.

Of the £112m that is spent, £40m comes from various public grants or from trusts. The other £72m  is raised by parishes themselves: a pretty heroic effort, but one that is simply not equal to the scale of the task. There are 16,200 Church of England churches of which 12,000 are listed buildings. English Heritage undertook research with the Church last year that estimated £925m would need to be spent on essential repairs to these buildings over the next five years  – or £185m a year.

Of course many churches pursue fundraising or income generating activities. Suggestions have been made that post offices could be accommodated in many churches. We  should not be outraged by the suggestion: before the onset of village halls churches housed all sorts of activities far worse than post offices: even, according to the Bishop of London, cockfighting.

But whatever commercial wheezes are developed, none is going to maintain the church in the way it needs to be maintained, unless the church closes and the building is redeveloped  altogether, which is the last thing we want. We can preach to the local people all we like about  raising money for their church but, regrettably, only a hard core in each parish will see it as “their  church”, and all the burden of keeping it going will fall on them.

Meanwhile, the walls get damper, the death-watch beetle ticks away, the tracery in the windows starts to crumble, and the tower becomes a hazard to health and safety. The overwhelming nature of the problem is why, despite my own anti-statist instincts, I strongly believe the state must intervene.

Our culture is important 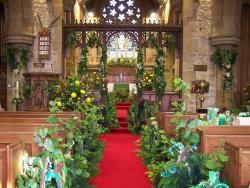 Intellectually, I can justify this twice over. First, the Church of England –and it is the only church I am concerned with here – is the established church. The Head of State is the Supreme  Governor of the Church. Whether the State likes it or not, it has an umbilical link with  these 12,000 listed buildings that are such a headache to a country that likes to think it cares about its history.

This brings us on to the second reason why an intervention would be justified. These buildings are one of the great features not just of our landscape and of our life, but of our culture as a people and as a nation. Is any responsible government, in this day and age, really going to stand by and watch these great buildings fall into ruin?

Of course it can’t. I know we have a record deficit, and that we as a nation are living beyond our means to a grave extent. But our culture is important. If those directly responsible for a part of it are trying their best –and I think we can all agree they are –and it is still not enough, then to avert catastrophe the government but step in. That is what governments are for.

If it cannot find, each year, £73m to bring spending on churches up to the required £185m, then we are in a pitiful state. Total public spending is over £700billion. All we need is just over one ten-thousandth of that sum to be put aside each year to save a priceless and unique national resource. It may mean adjusting some priorities. I would be happy to suggest to the Chancellor of the Exchequer where he might save that £73m that might otherwise be put to such good, and important, national use.

I am afraid I see no other way forward. It might be healthy for the government, if it can be persuaded to use taxpayers’ money in this way, to link it to money raised by parishes themselves –to match funding from local people or even from lottery grants. At some time in our national conversation we have to start asking, quite pointedly, why we pay income tax,and what we expect in return for it.

The churches are an integral part of our nation. Even if we are atheist, Jew, Muslim or Hindu – or even Catholic or Methodist – they belong to us, just as St Pancras Station belongs to us, or the Royal Crescent in Bath, or Stonehenge. They are part of our particular world, part of what we all of us understand to be a symbol of our country. They are an embodiment of our history, a repository of our art, and a memorial to generations of our people. It may be that Lambeth Palace itself is going to have to speak to the government about this, and to do so in terms that reflect an ultimatum rather than a polite inquiry.

More money must be found

We cannot go on as we are. I salute and admire the voluntarism that has heroically – and  make no apology for using that word again – kept things going this long. But as buildings get older, as years and decades pass since their last restoration, and as expensive requirements arise to make the buildings more widely useful to the community, more money must be found.

The government has a responsibility for the historic culture of our nation and its people. Where church buildings are concerned it must exercise that responsibility, and do so urgently. I should like to think that in 20 years’ time I shall be driving my own grandchildren around showing them the wonders of how the late Norman moves into Early English – even if, by then, a government has succeeded in abolishing drinking, so there will be no pubs left to visit. I just hope the churches, as we know them, will not have started to go too.

They have always been there - but it would be a grave mistake to assume they always will be.