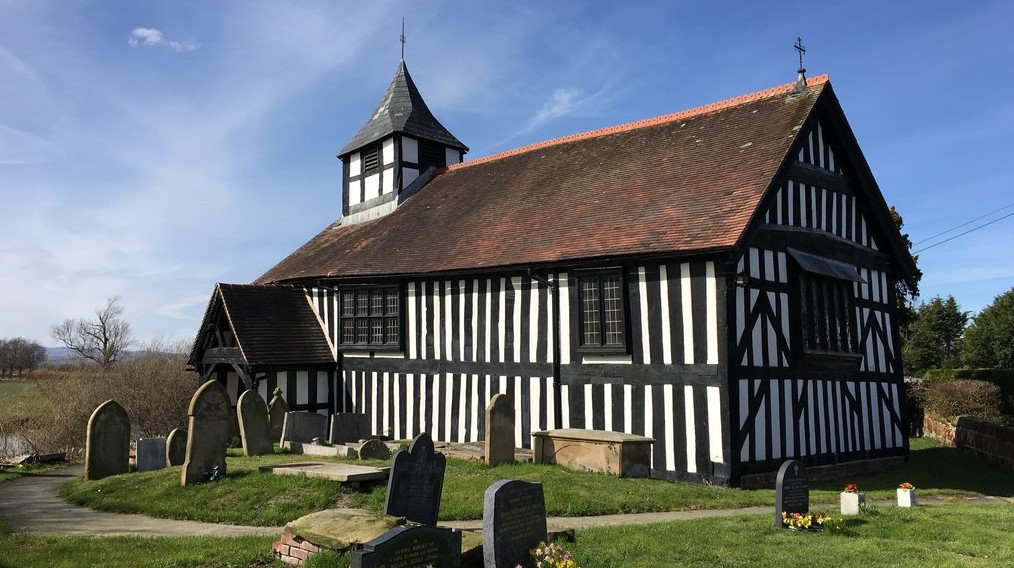 Situated on the banks of the River Vyrnwy, can be found a rare example of an Early English church constructed of timber, wattle and daub.

The only building of its type in Shropshire, the timber framed St Peter’s was rebuilt in 1406 to replace an original wooden church that was burnt down by Owain Glyndwr during the Welsh uprisings in 1401.

During Saxon times Melverley was a small hamlet on the riverbank where the rivers Severn and Vyrnwy meet. The ancient Manor of Melverley was once held by the Earls of Shrewsbury before passing to the Fitz-Alan family who became the earls of Arundel.

Apart from the lower two-thirds of the east wall behind the altar, the building we see today is exactly as it was built over six hundred years ago. In many parts, the white sections are narrower than the timber framework, an indication of an early timber construction.

Through the small porch, the church is exactly as you would imagine. The humble altar table is early Jacobean, around which the people of Melverley gathered to celebrate the Holy Communion nearly 400 years ago, and continue to do so today.

The pulpit is also Jacobean, with interesting carving worthy of close inspection. The lectern holds a chain Bible dating from 1727. Bibles were once chained - as reading became more universal, there was a danger the Bible might be borrowed and not returned.

The Saxon font is the only reminder of that first early church, although the font cover is more recent, dating from 1718.

The narrow turning staircase allows entry to the gallery, the perfect place to take in the church’s beauty and peacefulness.  The gallery slopes somewhat, the result of the massive piece of oak, on which the gallery is built, settling when originally put in place.