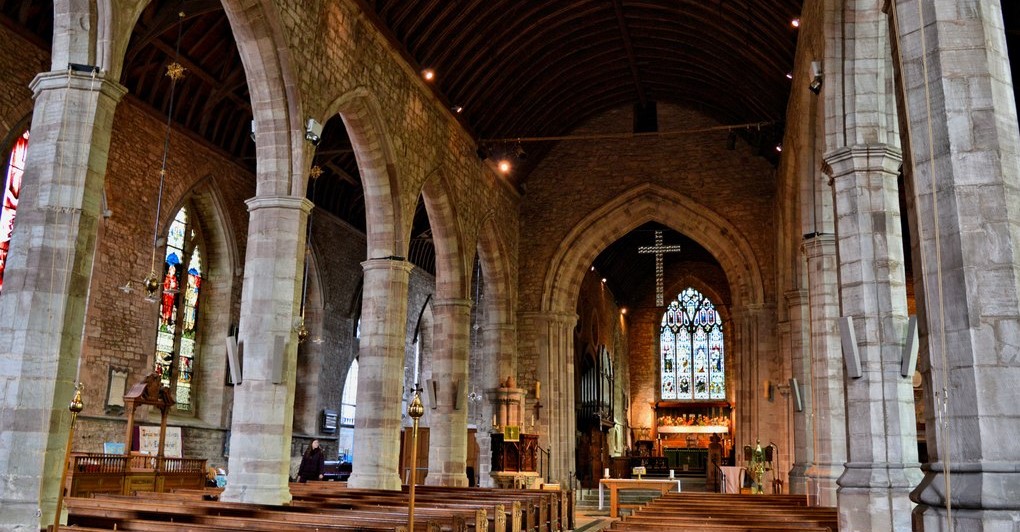 Described by Nikolaus Pevsner as ‘the premier parish church of Herefordshire’.

A church is listed in the Domesday Book of 1086, but the current building dates to the 12th century, with 16th century extensions. The impressive tower was built around 1230 and the spire added in 1733. Unusually, the tower is not connected to the body of the church.

The nave arcade is remarkable for a series of round port-hole windows, the last vestige of a 12th-century clerestory.

The 1630 memorial records the lives of Edward and Elizabeth Skynner, who both lived into their 80s. Elizabeth is wearing a hat that would not disgrace someone attending a wedding today! Their baby, who died young, is shown between their kneeling figures, and their five sons and five daughters who survived to adulthood are below. Edward was one of a group of wealthy clothiers who between them are responsible for building many of the fine houses of Ledbury.

Against the south wall is a memorial to later Skynners. Captain Samuel Skynner and his wife Anne. The bust of Captain Skynner's (died 1725) is shown against a backdrop of naval symbols. When he died he left 6 pounds a year - one to the vicar to say a sermon on Candlemas day and the other 5 to be distributed on the same day to 'twenty poor House-keepers, not receiving alms'.

There are 2 fonts. The oldest dates to the 17th century, the more recent to the Victorian period. The 17th-century font was thought to be lost but was later discovered to have been broken into small fragments which were hidden within the base of the 19th-century font!

A stone and marble wall-monument to Dr. John Hoskins, rector from 1612 can be seen, with a bust in ruff and cap and draped canopy with cherub-heads.