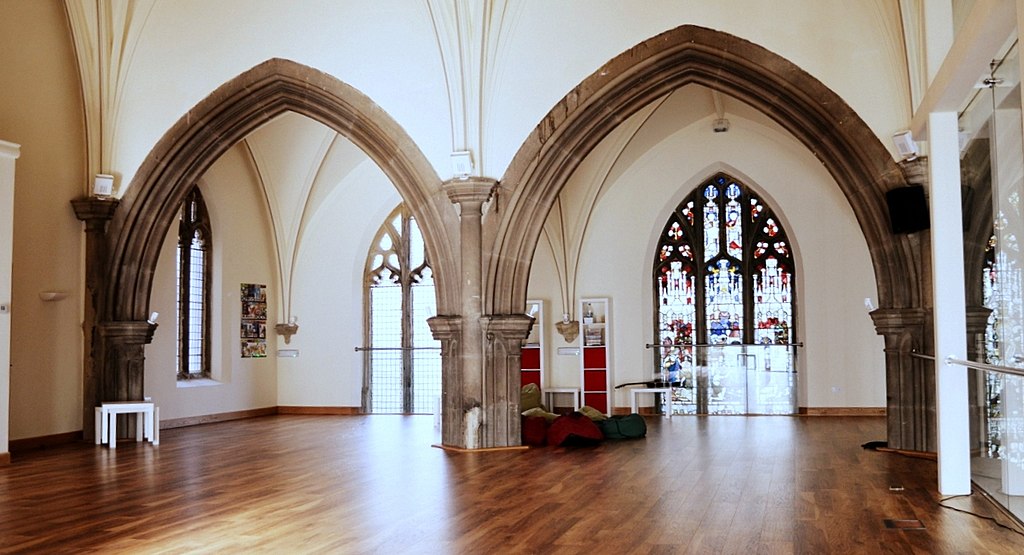 The only surviving Church Commissioners' church in Leeds. After many years with dwindling numbers of loyal but aging regular worshippers, it was declared redundant in 2001. But this was not the end, merely the beginning of a new life.

Commissioners Churches or, as they are more commonly known, ‘Waterloo churches’,  get their name because they were built as a result of two grants made in 1818 and 1824 for the purpose of building churches in the new parishes being created in the ever-expanding cities.

England had a bit of a national-pride high after beating Napoleon in 1815 and it’s suggested that the Church Building Act of 1818 was aided through Parliament by that post-Waterloo glow of thanksgiving. The Incorporated Church Building Society was founded in the same year, becoming responsible for the building and enlargement of many hundreds of Anglican churches and chapels.

The first grant was for £1 million and the second was for £500,000. St Mark’s was built as a result of the first grant and was built to designs by Peter Atkinson and Richard Hey Sharp. The first stone was laid on 23 April 1823 and the church was completed in 1825.

The churchyard, opened in 1831, closed for burials in 1958 and was designated a Leeds Nature Area in 1994. Many of the memorials bear witness to the wealth of the inhabitants of the area in the last century. Most were professional people and their skills are often mentioned on their headstones, such as one near the west door commemorating a bone setter. The Mawer memorial is dedicated to sculptor Robert Mawer who died in 1854.

Sadly the church was short lived and in 2005 was made redundant, being left to fall into a state of relative disrepair. But, this was not the end. In 2014 the Grade II listed building was purchased by the Gateway Church and underwent a transformation. The sheer ambitiousness of this project to bring this neglected church back to use is a testament to the commitment of this modern church community of which 75% are students.

Overcoming legal and funding issues, they have achieved a comprehensive transformation of the building. The nave and chancel with its high ceilings and pillars now create a beautiful and spacious meeting area for up to 240 people. Fitted with a stage and high tech visual and audio equipment, it can be hired out for a wide variety of events, conferences and parties. An upper room has been established as well as a a fully functioning kitchen together with a refreshement service and fully qualified chef. As well as being a church for worship, it has become a church that is loved and used by the community - a church that is a 'House Of Good'.

It is no surprise therefore that the team who transformed this church won the ‘best in church repair and conservation’ at the Celebration of Excellence UK Church Architecture Awards.

It is also worth mentioning that the Incorporated Church Building Society is one of the National Churches Trust’s predecessor charities, and today we carry on the work they started back in 1918.