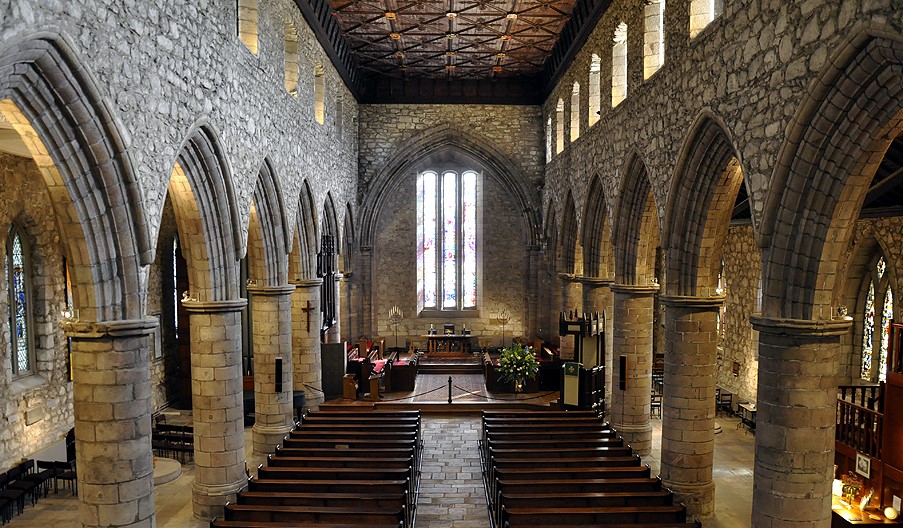 Legend tells of God instructing Machar to find a river which bends in the shape of a crozier, before entering the see. He found his spot on the River Don in Old Aberdeen and so built his church around AD 580.

In 1131, the church was rebuilt in the Norman style. At that time it was given cathedral status when the see of Mortlach was transferred to Aberdeen.  Nothing remains of that church apart from a carved capital fragment.

The church was enlarged in the late 13th century by Bishop Henry Cheyne, who wanted a fortified kirk, with towers more reminiscent of fortified tower houses than church towers. However, the Scottish Wars of Independence halted the completion. In 1305 William Wallace was captured and taken to London to be executed by the English on 23rd August. His body was cut into quarters, each part sent to different towns as a warning against rebellion. Legends tells of one arm and part of the torso was sent to Aberdeen where it was buried within the cathedral wall.

In the late 14th century the cathedral was almost completely demolished by Bishop Alexander Kininmund II, who began building a new nave and west towers. This work continued into the late 15th century, and even in the early 16th century when Bishop Gavin Dunbar commissioned the creation of the heraldic ceiling.

The ceiling is magnificent, both in its beauty and as a record of social history. Brightly painted heraldic shields act as bosses on a flat wooden ceiling made up of 48 panels. Each shield bears a coat of arms of European monarchs and the most important bishops and earls of Scotland. Around the edge is a frieze listing bishops from 1131, and Scottish monarchs from Malcolm II to Mary, Queen of Scots.

St Machar’s was almost demolished during the Scottish reformation. Not only did it lose its status as a cathedral, but the chancel was also torn down with lead stripped from the roof. Stones were taken from the walls by Cromwell’s army, to build a fort which resulted in the collapse of the central tower during a storm in 1688. Only the nave of the medieval church survived.

In 1660, St Machar’s once again received cathedral status, but it is in name only as The Church of Scotland do not have cathedrals.