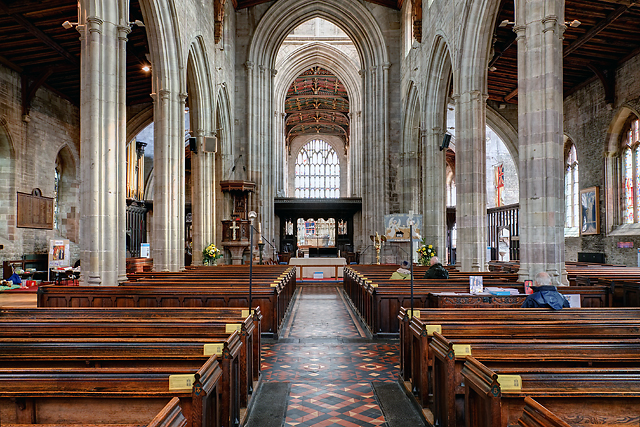 The size and grandeur of St Laurence’s signifies the importance of Ludlow and its status as a wealthy medieval wool town.

The Normans founded Ludlow in the late 11th century, erecting the church in the shadow of the great castle. As the town grew so too did the church and it was rebuilt in 1199 to accommodate Ludlow's growing population.

During the late Middle Ages, as Ludlow’s wealth prospered the wealthy guilds of wool merchants were eager to furnish their church with lavish family tombs. The church needed expanding again and the rich merchants who made up the membership of the Palmers Guild were mainly responsible for this. They chose the new fashionable Perpendicular Gothic style.

Entry through a peculiar octagonal porch gave way to a cavernous interior with slender arcades, chancel and numerous chapels. Above the striking tower arch, the tower is a wonderful piece of late medieval architecture.tar and east window.

The chapels are exceptional for their medieval glass. The Palmers Guild commissioned the North Chapel, and also paid for priests to say Mass for their souls. One of the 15th century windows shows Palmers dressed in their blue robes on the road to Jerusalem. Another piece depicts the Annunciation, a masterpiece of medieval glass rivalling any in England. Overflowing with dedication boards and Biblical texts, the Lady Chapel contains another remarkable medieval window depicting the Tree of Jesse.

The large east Window in the chancel depicts the martyrdom of St Laurence. The chancel also is home to even more treasure, its medieval stalls. Many of these have misericords or 'mercy-seats', which allowed support for priests whilst standing during long services. These are wonderfully carved featuring a range of carvings including mermaids, a witch, a pieta, a dishonest ale-wife and even a poor young woman with the body and wings of a bat. Bats were once regarded as creatures of darkness and symbols of evil.

The chancel boasts a wonderful array of memorials, most dating to the 16-17th centuries. Amongst the finest memorials is that of Sir Robert Townshend. He was Chief Justice of the Marches of Wales and Chester and was knighted by Henry VIII on the 21st May 1545 at Hampton Court Palace. Erected in 1581, the memorial shows Robert and his wife Alice, together with heradlry and  images of his children as mourners

The font is a very worn bowl, dating the first Norman church on this site, complete with markings around the rim made by Cromwell’s army during the Civil War.

There is so much history and so many stories within the walls of St Laurence, including that of Prince Arthur, son and heir of Henry VII, who died in Ludlow in 1502. It is said that his heart was brought to the church and buried in the floor of the chancel. A plaque marks the spot of the burial. It is hard to see the memorial and not wonder how history might have been different if Arthur had lived and ascended to the throne instead of his brother Henry.