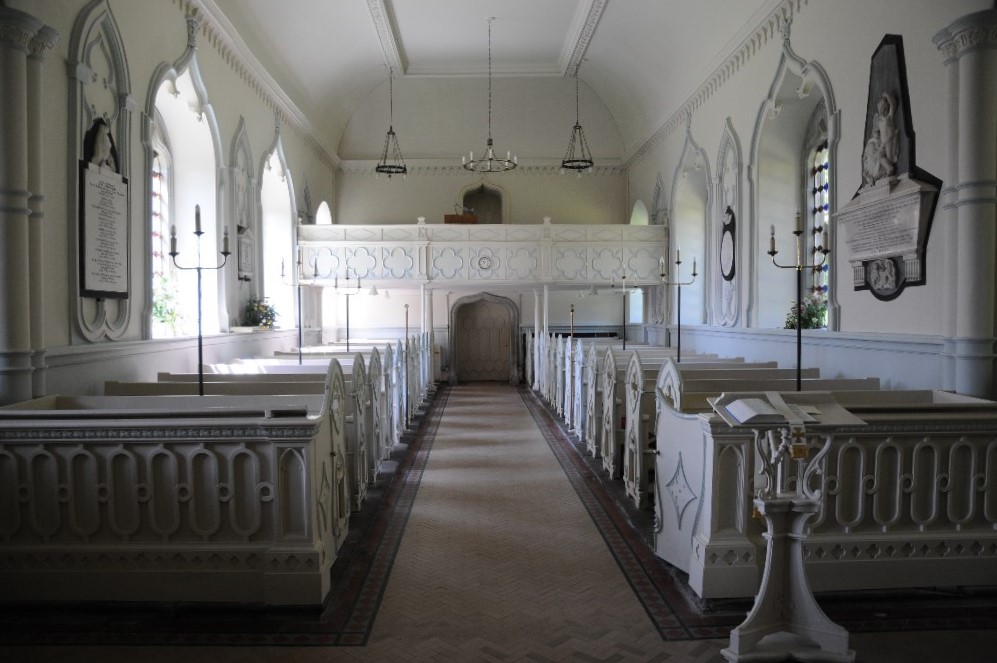 "Shobdon Church is a wonderful building, of unique architectural interest and a treasure which we must preserve…" HRH The Prince of Wales

Although some of the original 12th century stone building survives, this country parish church has the most complete Rococo Gothic interior in the UK, including all its furniture.

The first known church at Shobdon was a timber-framed chapel, built in Anglo Saxon times. This was replaced in the 12th century by a stone church built under the patronage of Oliver de Merlemend, steward to Hugh Mortimer. The story goes that Merlemend had taken a pilgrimage to Santiago de Compostella and on his return, founded a short-lived priory. A tower was added to the building in the 13th century.

This first stone church was fascinating. Its Romanesque decoration was  linked to the Herefordshire school which operated in the first half of the twelfth century. Its work was consistently of the very highest quality and epitomises everything that was best in English Romanesque decoration.  All that remains of that first church are the interior arches which were  removed in 1756, being placed at the top of an adjacent hill as a folly where they still stand.

The third and present church was built by the Bateman family in 1756. It consisted of a completely new nave, which was built onto the 13th century tower. It could hardly be more different to the original stone structure.

The exterior is plain, almost bland, yet the interior is a world of ebullient rococo and Gothic design that draws its inspiration from the work of Horace Walpole at his London house of Strawberry Hill. This ought not to be too surprising, as the Batemans were close friends with Walpole, and his ideas obviously influenced the design of this extraordinary building.

With a striking white and pale blue colour scheme, the interior offers a sense of calm and tranquility, allowing one to sit and savour the exquisitely carved ornamental arches which abound. Eventually your eyes are drawn to the lavish three-storey pulpit, which is based on one designed by William Kent for York Minster.

The church is aisleless, with a gallery above the west entrance, and a chancel marked by a trio of arches that appear almost oriental in style.  There is a separate door for the Bateman family, which gives onto the family pew, where they were provided with their own fireplace for warmth. Another door for their servants, gave access to the servant's pew in the north transept.

The original 12th century font still survives today. It shows four lions, nose to tail and is a beautiful example of the work by the Herefordshire School.