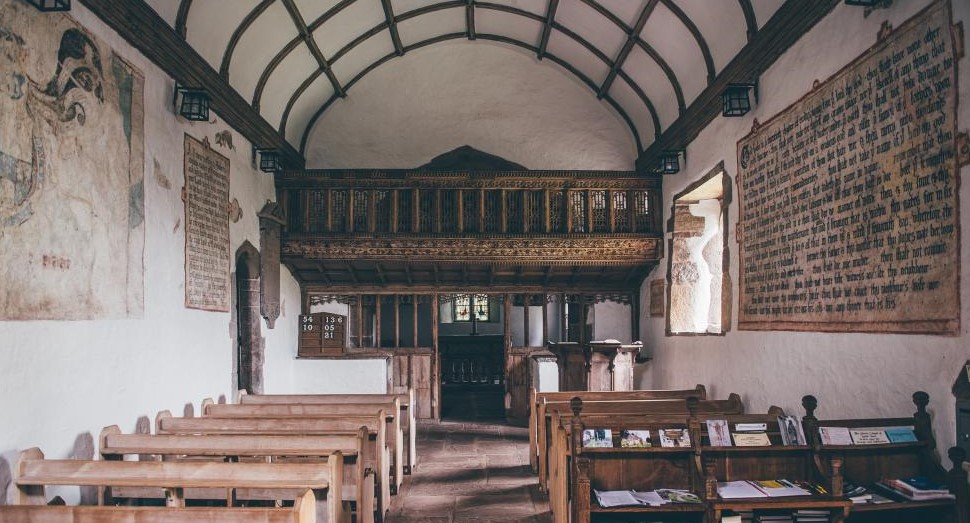 A sacred place in the Black mountains that is still today, a place of healing.

Whether you arrive on foot along the Beacon’s Way or by car along narrow lanes your arrival at Saint Issui’s church is captivating. The church overlooks Saint Mary’s stream where Issui is reputed to have lived as a hermit near a holy well.

The 6th century saint would befriend travellers. Sadly one day he was robbed and murdered by a traveller who asked for shelter but refused to be converted to Christianity by the holy man. Issui was probably buried in his cell and the site soon became a place of pilgrimage.

Many years later another traveller, who had been cured of his leprosy by the waters of the well, left a bag of gold for a shrine chapel to be built in the Saint’s memory. This chapel is now part of the 14th century church dedicated to Issui.

The church still retains its medieval wooden screen made of Irish bog oak. The intricate carvings together with those on the loft are among the finest pieces of medieval art in Wales. Look for figures of a fire breathing dragon, St Mary the Virgin, and St John the Apostle.

On the west wall is a Doom, or wall painting depicting the Biblical Day of Judgement. Even more impressive is the striking figure of Time, in the form of a skeleton, holding the traditional scythe and hourglass, as well as a spade. The meaning would have been clear, even to a largely illiterate population; your days are numbered, so use them wisely. According to legend, the painting has been covered with whitewash several times but each time it mysteriously reappears.

Leading off the west end of the nave is a 13th century 'chapel of the grave', erected over the grave of St Issui. The grave site is beneath the altar and is marked by a slab incised with six small consecration crosses, one more than the usual five crosses.

The holy well still has healing powers as Kathy Priddis discovered. She would often visit St Issui with her husband when seeking peace and quiet. In 2009, a year after having major surgery on her foot, which sadly left her in considerable pain, Kathy visited the church with friends and was helped down the steps to the well. She felt drawn to soak her bad foot in the water and felt a great sense of peace. After a few minutes she returned back up the steps and realised that she had done so with no difficulty. At her next appointment, her consultant discovered he could find no trace of anything wrong with Kathy’s foot, it had been ‘miraculously cured’.