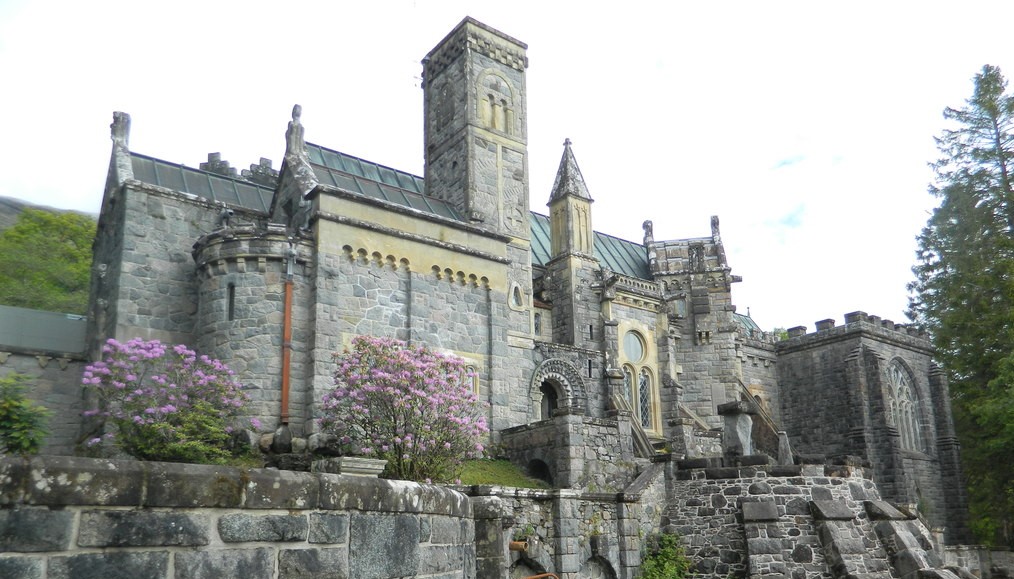 Overlooking Loch Awe, Scotland’s longest freshwater loch, this extraordinary kirk is just as beautiful as the scenery that stretches before it.

In the 1870s a new railway line was built along the north shore of Loch Awe, linking Dalmally and Taynuilt. Walter Douglas Campbell took advantage of easy access to the loch to purchase the island of Innischonan and build a mansion for himself, his mother, and his sister Helen. According to local lore, he started planning a church in 1886 for his mother, who found the long drive to the nearest church too taxing.

Douglas Campbell, an amateur architect and skilled woodcarver, designed the kirk himself, building a small cruciform church first. Siituated where the nave of the current church stands, it was completed in 1886. However, he dreamt of a grander, more elaborate building which encompassed every type of ecclesiastical architecture found in Scotland.

And so, in 1907, began the construction of a new kirk. It is indeed a hodgepodge of architectural styles with heavy hints of Romanesque in the archways,  fragments of Iona Abbey tucked into the walls, medieval windows spirited away from a nearby church and even a group of standing stones welcome everyone who pass through the church gates. Amongst the  unconventional architectural details are a row of carved owls  which perch over a wall, pelicans adorning the wooden organ screen, and a gargoyle shaped like a hound appearing to chase two hare-shaped waterspouts.

The Bruce chapel also contains a wood and alabaster carving of Robert the Bruce, complete with an ossuary below containing one of his bones, taken from his skeleton at Dunfermline Abbey. The oak beams within the cloister were salvaged from HMS Caledonia and HMS Duke of Wellington, which were broken up around the time the church was started.

Acting as architect, Campbell employed only local workmen and used only boulders found on the slopes of the hill above the loch. These were rolled down the hill to the building site and shaped on the spot.

On his death in 1914, Campbell’s sister Helen carried on the  work ensuring that it would be completed. Finally in 1930, the kirk was consecrated. It was well worth the wait. The interior is both light and gloomy, offering areas of peace and solace as well as breathtaking views out over the loch.