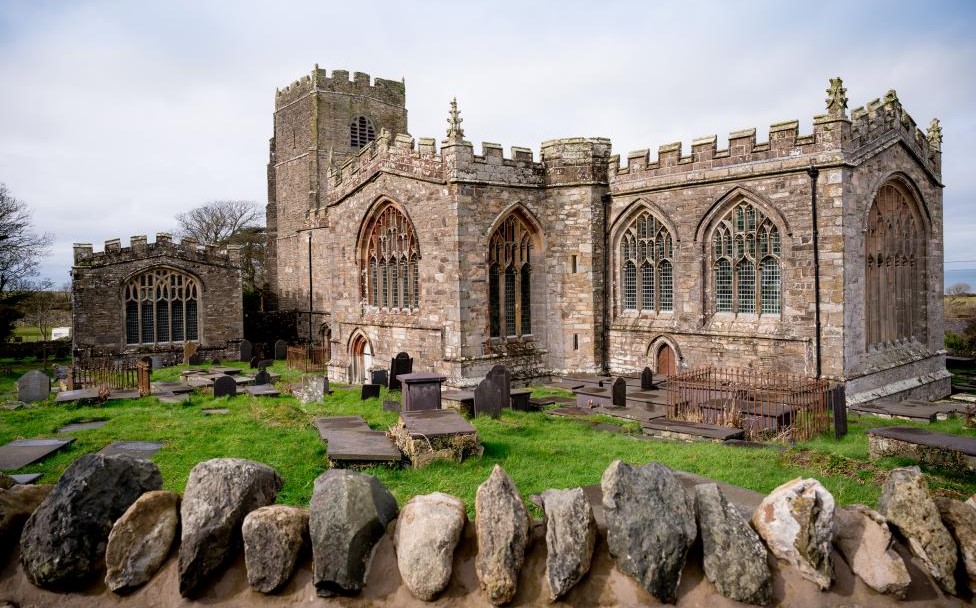 After Beuno's death in 640, his shrine and well became a stopping place for pilgrims travelling to Bardsey Island. Sometimes known as the 'Island of 20,000 Saints', Bardsey was a hugely popular destination in medieval times.

The holy well near the church was said to have curative properties, and St Beuno's tomb would be covered with rushes for sick children to sleep on for a night, after washing in water from the nearby holy well.

The original church that stood here has long gone, though St Beuno's Chapel, reached along a passageway from the church, is said to stand on the site of the old church and the saint's tomb.

The church itself is a handsome building dating from the 15th and 16th centuries. 18th century Welsh naturalist, Thomas Pennant described the church as "the most magnificent structure of its kind in North wales".

Pennant also observed that it was a tradition that lambs or calves born with a natural earmark known as Nôd Beuno (“Beuno’s mark”) were brought to the church on the saint’s anniversary for the churchwardens to sell. The proceeds were used for poor relief or church repairs, and were kept in Cyff St Beuno, a chest made from a single piece of oak and secured with triple locks.  Offerings from Bardsey pilgrims were also placed here and sinners could 'pay' for their sins by putting in their financial contributions.

Among the objects of interest inside is a set of dog handling tongs. These are telescopic, with several sharp spikes at the business end. These were used in the days when dogs were permitted in churches and fights and other misdemeanours were common.

The sundial probably dates to the 10th or 11th century. It was for many years used as a footbridge across the Glan-Mor mill stream at Aberdesach. It was later used to support milk pails at Llyngele Farm. It was returned to Clynnog Fawr churchyard in 1930. The sundial face is etched with three lines, dividing a semicircle into four parts, the traditional method used in Saxon time to divide each 24 hour period into 8 equal parts, or tides.