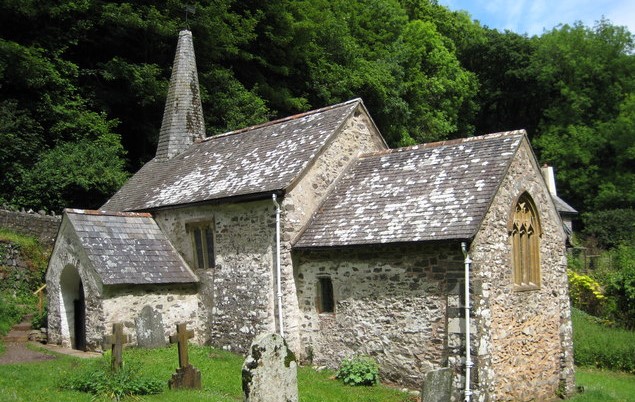 "To Culbone, Oare, and Stoke Pero, Parishes three, no parson’ll go" An ancient ditty describing the remoteness of three Exmoor churches. St Beuno church at Culbone, is only accessible via a woodland walk, but it is well worth the effort.

Sited in a quiet combe looking out to sea, this dramatic landscape was one that Samuel Taylor Coleridge frequented often. It is said that he drew on the mystical atmosphere of Culbone Church for his images portrayed in Kubla Khan’s ‘Xanadu’.

In 1797 Coleridge was staying at a nearby farmhouse when he fell into an opium-induced dream and, upon waking, started to write down his poetry. However, he was “called out by a person on business from Porlock” and the poem was never finished.  Years later  Lord Byron persuaded him to finish it and it was  published in 1816.

Byron's daughter Ada, married William King and they became the Earl and Countess of Lovelace, living at nearby Ashley Combe House. Ada was a mathematician who worked with Charles Babbage on the early mechanical general-purpose computer, the Analytical engine. She is often considered the world's first computer programmer, maybe reflecting on algorithms and calculations whilst attending St Beuno's, sitting in their box pew.

With seating for only 33 people, the Saxon church is just 35 feet long. Highlights include a very simple Saxon font and 14th century chancel screen. The nearby woods was the site of a a major charcoal burning industry as well as a 16th century leper's colony. Although the lepers were not allowed into the village, there is a small leper window in the north wall of the church. The window frame is carved from a single block of solid sandstone.

And even the conical spire, built of deal and slate has a tale to tell. Local tradition says that in 1810 a heavy storm blew off the spire on Porlock church, carrying it over the Exmoor hills all the way to Culbone where it settled.