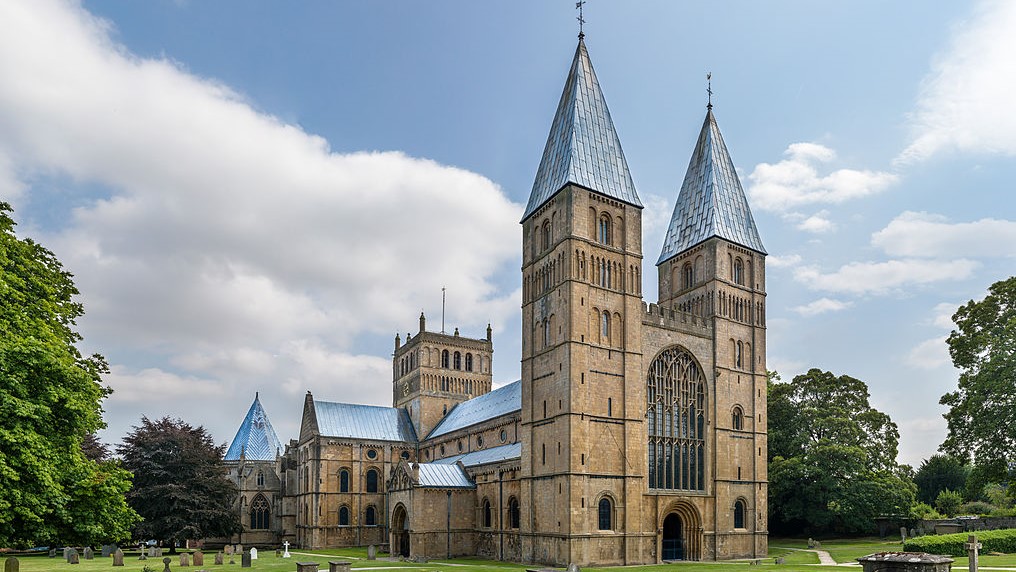 The chief reason to visit Southwell are these remarkable stone carvings, notably on the pulpitum, dividing nave and choir, and especially in the 13th-century chapter house where foliage festoons all 36 stalls and capitals.

Situated on the edge of Sherwood Forest, the remarkable carvings reflect the mythology and environment of a lost woodland world that once thrived beyond its iconic ‘pepperpot towers’.

The minster began as a Saxon manor, but in the 10th century it was granted to Oskatel, Archbishop of York. In 1108, work began on the present structure and it remains one of the best examples of the Romanesque style in England. The distinctive west towers flanking the broad entrance doorway were originally topped with spires. These were replaced with the current pyramidal roofs in 1880. Above the west door is a huge 15th-century window which fills the interior with light.

Set in one of the 12th century walls can be found the ‘Southwell Tympanum’, a carved lintel stone that possibly dates form the 9th century. It is beautifully carved with the image of the Archangel Michael wielding a sword, in combat with a serpent, or dragon. To one side is a damaged figure, presumably King David, pulling at the gaping jaws of a lion.

The heavy Norman nave is in stark contrast to the 13th century exuberance of the pulpitum screen. It is one of the glories of 13th-century sculpture in England, and yet there is still more to enthal when entering the Chapter House. Begun around 1290, there  is sadly no knowledge of the craftsman responsible for this work of genius. Every capital, cornice, and column springs to life; human figures pear through the foliage and flowers. Buttercups, vines, maple, hawthorn, hop, ivy all vie for space. The detail and proportions are perfect and unlike anything else in England.

Very unusually, the chapter that administered the Minster survived the Reformation and was not dissolved until 1840.

By continuing to use the site, you agree to the use of cookies.