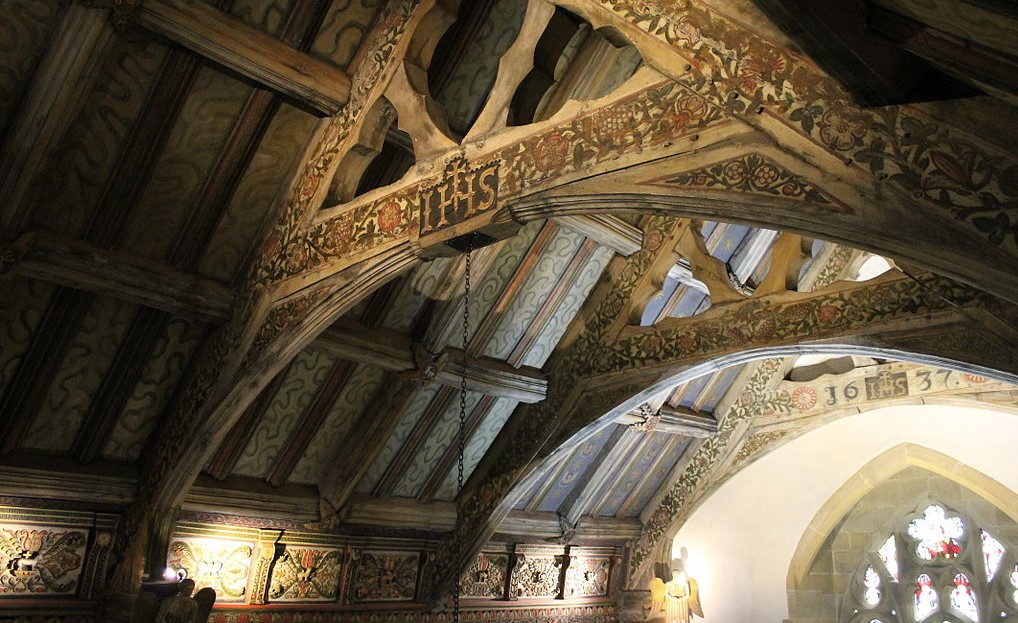 A paradise of animals and carved angels, elaborate roof beams and decorated pew ends, all contained within a simple 17th century chapel.

From the outside Rug Chapel appears rather demure and exceedingly simple with its single cell building and small bell turret. But open the door and enter inside and you are greeted with a fantasy of carved flora and fauns covering, roof, walls and benches.

Rug was built in 1637 as the private chapel of Colonel William Salesbury, affectionately know as “old Blue Stockings”, a steadfast Royalist who defended Denbigh castle for six long months during the Civil War, before surrendering to parliamentary causes.

Whilst others around him worshipped in a more Puritan manner, Salesbury decorated his chapel as ornately as possible. No surface was left untouched resulting in this flamboyant of church interiors.

The lighting creates an ethereal atmosphere where scaly dragons, whimsical animals and cherubs live together in a world of floral splendour. Amongst the religious symbols is a skeleton, reminding the congregation of their own mortality.

The roof is spectacular.  Every beam is carved and painted from end to end. The design gives hints of a medieval angel roof with its four wooden angels guarding from above. Standing above the west end and accessible from a set of stairs, is the gallery. It is the perfect place to stand and view the splendour of the interior.

Described as an “upright and honourable man”, Old Blue Stockings died at the age of 80, living to see the restoration of the monarchy in 1660. His beloved chapel is still as he designed it, a legacy to his colourful character.

The chapel is located immediately north of the A55, at the A494 junction, just west of Corwen and close to Llangar church which has a fine display of 15th century wall paintings.

Although it may not be to every taste, Rug chapel is quite simply stunning, elaborate that must be seen.