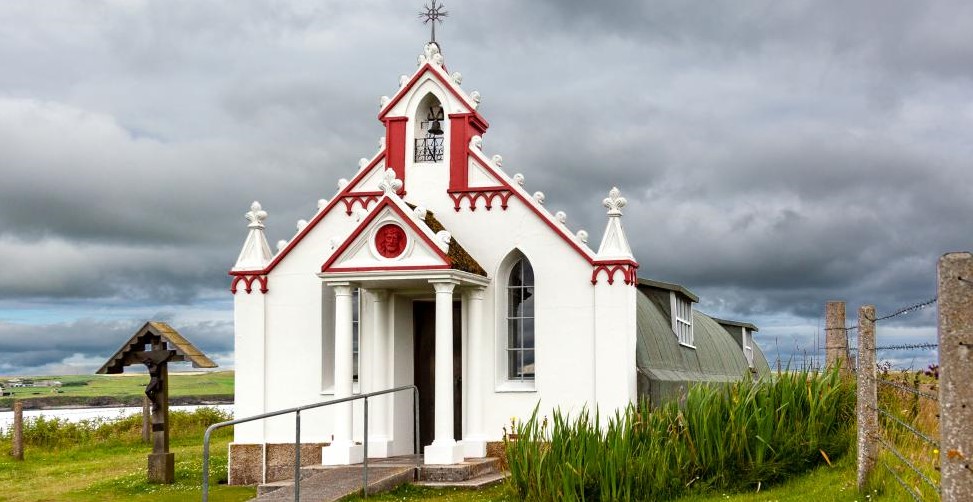 Built out of wartime necessity, the chapel stands after seventy years, as a reminder of a faith that flourished in adversity.

During World War II over 1000 Italian prisoners were brought to the Scottish Orkney Islands where they erected the deceptively simple place of worship now known simply as the Italian Chapel.

Captured in North Africa and transported to Orkney, they were to assist with the building of the Churchill Barriers at Scappa Flow, the based of the Home Fleet,  in order to make it more secure following the sinking of HMS Royal Oak with the loss of over 800 British sailors.

Low in spirits, the camp priest, Father Giacobazzi, approached the camp commandant, Major Buckland, to ask if they could build a chapel. Being sympathetic to the prisoners, he agreed and two Nissen huts were made available, one of which was used as the rec room. The huts were converted into a long chapel. On the front they built a wooden façade that gave the church a rather austere appearance.  Inside the tin huts, the arched walls and ceiling were painted to give the impression the church was built of stone.

Domenio Chiocchetti, an artist, was tasked with painting a picture of the Madonna of the Olive Branch above the altar. Before he had left home his mother had given him a prayer card. He had kept it close with him throughout his capture and he used this as the basis for his design.  The central part depicts the Blessed Virgin holding the infant Jesus in her arms, he is offering his mother an olive branch, the symbol of peace.

Many of the prisoners assisted Chioccetti - including a blacksmith who crafted the rood iron screen, one of the outstanding features of the building. The unsightly corrugate iron of the Nissen huts was hidden by plasterboard and beautifully painted. The altar, altar rail and holy water stoop were moulded in concrete. The glass in the two windows either side of the altar were painted with pictures of St Francis of Assisi and St Catherine of Sienna.

Other symbols of peace include an angel holding the heraldic badge of Moena (Chiocchetti’s, home town) which shows a man rowing his boat out of the storm towards the calm sea. On the ceiling the white dove of peace. The image of the Blessed Virgin is inscribed ‘Regina pacis ora pro nobis’ (Queen of Peace pray for us).

Just prior to the end of the war most prisoners were released, but Chiocchetti actually stayed behind to finish the little chapel that had become such a holy refuge for the prisoners. When he left, the chapel fell into disrepair, but was restored both in the 1950’s and the 1990’s.