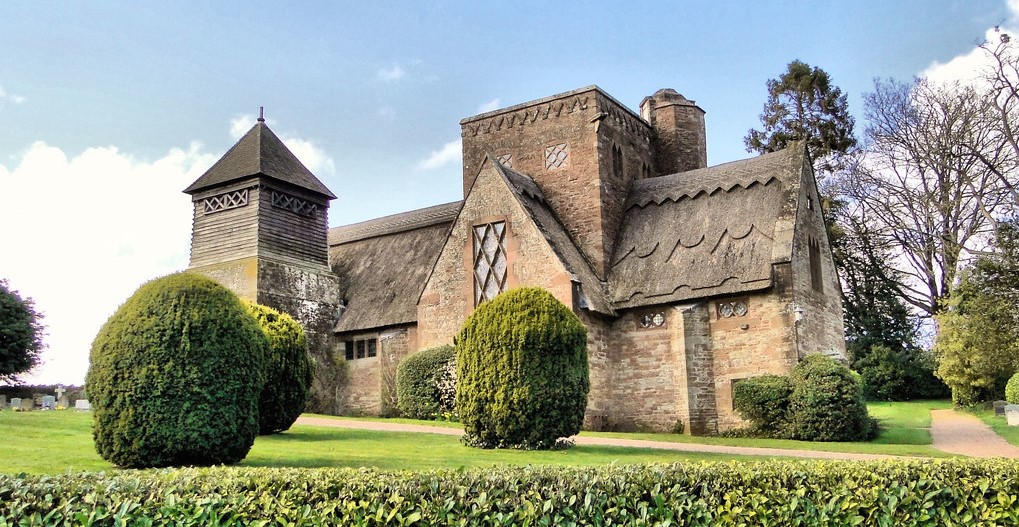 American heiress, Alice Madeline Jordan and her husband Arthur Forster were given Brockhampton Estate as a wedding gift. Deciding the existing medieval parish church was too small, Alice commission the building of All Saints in 1901.

The church was built as a memorial to her parents and was situated outside the grounds of the estate at the end of the 400, metre long drive opposite the Estate’s imposing gates.

Alice chose as her architect William Richard Lethaby, a leading light of the Arts and Crafts movement who had been heavily involved in the creation of the Central School of Arts and Crafts and appointed Principal in 1902.  The School championed a hands-on approach, believing that skills grew out of a sound knowledge of materials, techniques and structures.

During his lifetime, Lethaby only built 6 buildings with All Saints being his last work. Producing only eleven sketchy plans to work from he originally intended to be on site himself, ensuring that the whole construction would be undertaken by local craftsmen so that he could allow the individual expressions of each skilled worker to flourish.

However, problems occurred, not least, when other work commitments took him away from site. His assistant Randall Wells experimented with mortars and allowed an arch to collapse. He also extended the tower by ten feet with near catastrophic results. As the church neared completion a crack appeared in the south transept due to inadequate foundations.

Despite the many problems which Lethaby ecountered, the final result is spectacular.  An eclectic mix of styles – a simple stone porch, an oak clad belfry topped with cedar wood shingle roof, a thatched roof and ornamental traceried windows.

Inside, the wonder continues – from the steep pointed arches and vaulted ceiling to the roof, which was constructed from unreinforced concrete, it gives the impression of timbers planks complete with grain and saw cuts!

Either side of the altar are two tapestries made by the William Morris Workshops from designs by Edward Burne-Jones.  Lethaby designed the font, its entwined vines echoing a Syrian tomb.

Sadly, all the strain brought Lethaby close to a breakdown and he retired from practise shortly the church was completed.

Learn more about All Saints