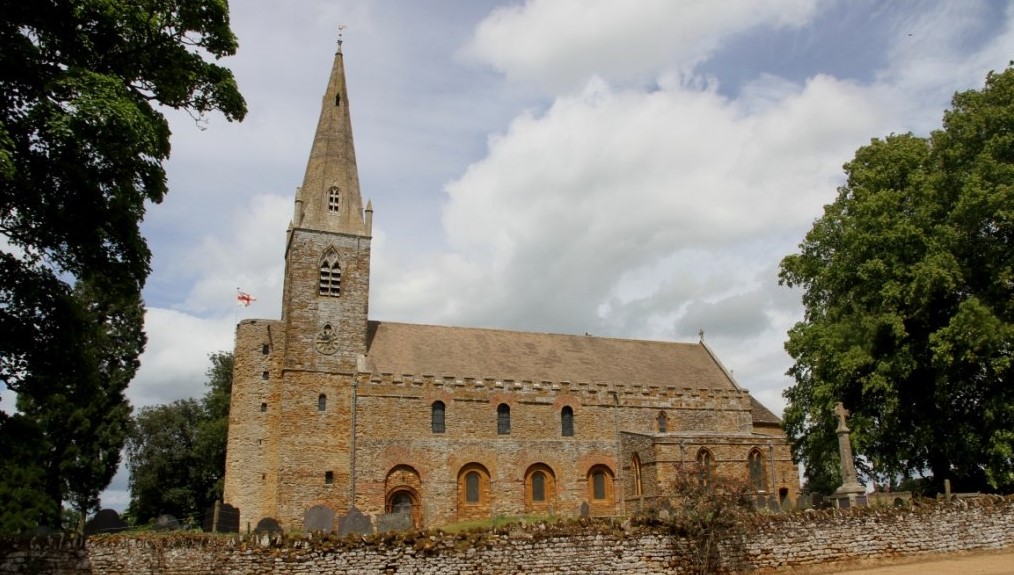 The present church dates from 750AD and replaces the original wooden structure which served the monastery.

Marauding Vikings destroyed the abbey in 870 and the large church ruined but fortunately not destroyed. A century later, between 960 and 970AD the church was repaired. Porticuses to the north and south of the nave were removed and clerestory windows added to create a smaller church which is still a magnificent site to behold with much of the Saxon architecture still intact.

Viewed from the south, it is clear to see where the porticus once stood. When building the church, the Saxons re-used Roman terracotta bricks, pillaged from another building and pieces of Roman tile can be found within the filled in arches.

All Saints contains some beautiful Saxon features.  The entrance to the church is through a fine Norman doorway built within a much larger Saxon arch. Remnants of side arches can be seen in the chancel. Through these arches, steps once led down to the covered ambulatory to a ring crypt which surrounded the apse, in which a holy relic may have been kept.

During renovations in 1809 the stone “Brixworth Reliquary” was discovered. A 14th-century container for saintly relics, when opened, a human throat bone wrapped in cloth was found within.  Inscribed on the cloth may have been the name of the saint but on exposure to air, the cloth disintegrated, and any chance of discovering the bone’s identity was gone. Some say it is the larynx bone of St Boniface, who frequented the area during the medieval period.

The lower part of the tower is also Saxon work. The curious round external stair turret that climbs the west tower was added in the 11th century and is one of only four such turrets in the country. Typical Norman zigzag stonework can be spied on looking upwards.

The decorative 15th century screen at the entrance to the Lady Chapel once stood in front of the apse. Reduced in size to make it fit and repainted in the original medieval colour scheme it now serves as the First World War memorial.  Behind the screen the 13th century Lady Chapel contains the effigy of a knight, possibly a Crusader.

Learn more about All Saints