Woodworm is a generic name for the wood-eating larvae of many species of beetle. If left untreated it can cause serious damage to a church building. 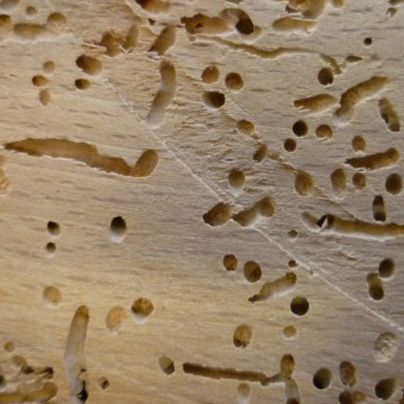 A recent example is at Brechin Cathedral  in Scotland which in 2019 is dealing with the damage caused due to  a woodworm infestation in the bell tower.

An application has now been lodged with Angus Council to repair the timber following a fundraising drive.

The bearing ends of the timber beams in the upper bell tower chamber have decayed due to a wet rot and timbers have also been affected with a heavy woodworm infestation and there are sections of decay along the lengths of the beams.

According to Wikpedia, there is a large number of different types of woodworm.

How to spot woodworm

Signs of woodworm usually consist of holes in the wooden item, with live infestations showing powder (faeces), known as frass, around the holes. The size of the holes varies, but are typically 1mm to 1.5mm in diameter for the most common household species. Adult beetles which emerged from the wood may also be found in the summer months.

Typically the adult beetles lay eggs on, or just under the surface of, a wooden item. The resulting grubs then feed on the wooden item causing both structural and cosmetic damage, before pupating and hatching as beetles which then breed, lay eggs, and repeat the process causing further damage.

As the beetles evolved consuming dead wood in various forest habitats, most grubs, if not all, typically require that the wooden item contain a higher moisture content than is normally found in wooden items in a typical home.

A church with a woodworm problem in the structure or fittings may well also have a problem with excess damp. The issue could be lack of ventilation in a roof space or other enclosed space within an otherwise dry building.

Whilst damp is a leading factor resulting in woodworm some species of woodboring insect, such as the Woodboring weevil, are only found in instances where fungal rot has already begun to occur.[

How to treat woodworm

"Active beetle can be identified byflightholes that look clean with sharp edges andbore dust trickling from them. A few scattered beetles in a building need not cause much concern, but dozens of beetles below a beam end might indicate the need for some form of treatment."

"Infestation deep within the wood is more difficult to detect because the beetles will not necessarily bite their own emergence holes if plenty of other holes are available. This problem may be overcome by clogging the suspected holes with furniture polish. Any emerging beetles will make a hole that should be visible, so that the extent and magnitude of a problem can be assessed."

"The insecticides systematically used to control woodworm and other beetle infestations are often not needed in historic buildings, and in some cases make matters worse by killing the insects’ principal natural predators – spiders .Insecticides formulated as a paste can be effective – either applied to the surface or caulked into holes -but the formulations may only be obtainable by a remedial company. Surface spray treatments are generally ineffective because they barely penetrate the surface of the timber and the beetles’ natural behaviour does not bring it into much contact with the insecticide."