The shortlist for the 2021 King of Prussia Gold Medal for innovative, high quality church conservation or repair work projects has been announced.

Projects shortlisted include new gargoyles and work on the tower and spire of St. Mary's church in Adderbury Oxfordshire; a repair project which revealed previously unknown wall paintings at St Peter's church Knowstone, Devon;  repairs to the tower and spire of the medieval church of St Margaret, Lothbury in the City of London, and which included work on parts of the church which had been unseen since 1699; repairs to a complex roof containing 15th century and Victorian material at St Julitta, Lanteglos; and both urgent and community morale-boosting repairs at St Leonards, Shoreditch including the symbolic restoration of the historic church clocks.

Five entries have been shortlisted:

The architect and the scheme judged to be the winner will be announced by Prince Nicholas von Preussen at an Awards Ceremony which is planned to take place at St Mary Magdalene Church, Paddington on Thursday 4 November 2021. Also at the Awards Ceremony, the winners of the Presidents' Award for new church architecture will be announced by the Duke of Gloucester KG GCVO ARIBA.

The winning architect will receive the King of Prussia Gold Medal, the gift of King Frederick William IV of Prussia (1795 – 1861) to the Incorporated Church Building Society in 1857. The award has been made annually since the early 1980s, when the medal was re-discovered during an office move. The medal is held by the winning architect for one year and afterwards a silver replica is provided. The winning church or chapel will receive a £500 prize.

In selecting the winning entries, judges will be looking for innovative, high quality church conservation or repair work that has successfully overcome a major aesthetic or technical challenge.

The 2021 shortlisted entries are listed below

St Julitta's is a Grade I Listed medieval Cornish church in the Parish of Lanteglos by Camelford. Parts of the building date back to Norman times and there are a number of important heritage features such as 15th century glass; rare use of an ancient symbol and a National Scheduled Monument in the churchyard.

The building was on the Heritage At Risk register for a number of years due to problems with the roof. The project exposed a 15th century roof and repairs retaining the character of the current roof wherever possible. This required painstaking recording of each purlin, common rafter truss, rafter and collars. A repair had to be tailored for each timber.

In addition there were poor Victorian repairs which in places were kept to support the fragile 15th century trusses and in other places had to be removed as they were causing damage to the north transept roof. Here a new roof was carefully threaded through the old structure to provide new support and to support the new rag slate roof. Much of the roof slate was salvaged but one whole roof slope needed replacing with new rag slate. 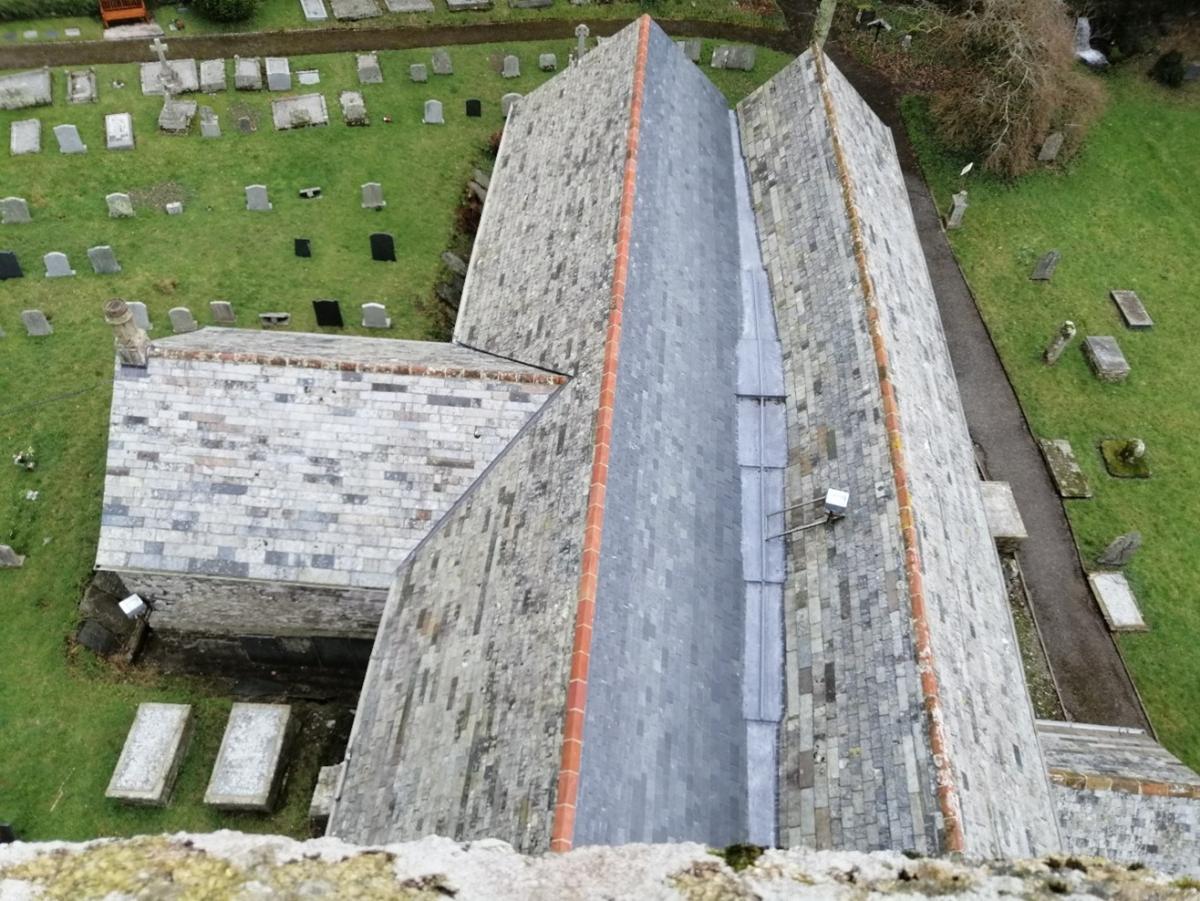 St Leonard's Shoreditch is a Grade I listed church and one of the oldest buildings in Shoreditch. The 1740 building, designed by George Dance the Elder, with its 192ft tall steeple, enjoys a very prominent location in Hackney and is a building of national significance.

A comprehensive programme of conservation and regeneration was undertaken, helping repair the church and which has removed it from Historic England's Heritage at Risk register. Work has included repair and strengthening of the portico, where water penetration caused by blocked roof outlets had led to the rusting of previous iron repairs, thereby spalling and cracking its stonework. The recently completed west facade repair project included stone repairs and cleaning to the facade up to the clock level.

The repair works started in 2017 and are slowly addressing all the major cause of decay in order to bring this beloved church back to life and preserve it for future generations. The repaired clocks especially capture a lot of attention. The hands are turning again for the first time in nearly 40 years, and the backlit clocks are clearly visible to the locality, symbolically emphasising that time starts moving again for the church after decades and looking to the future. 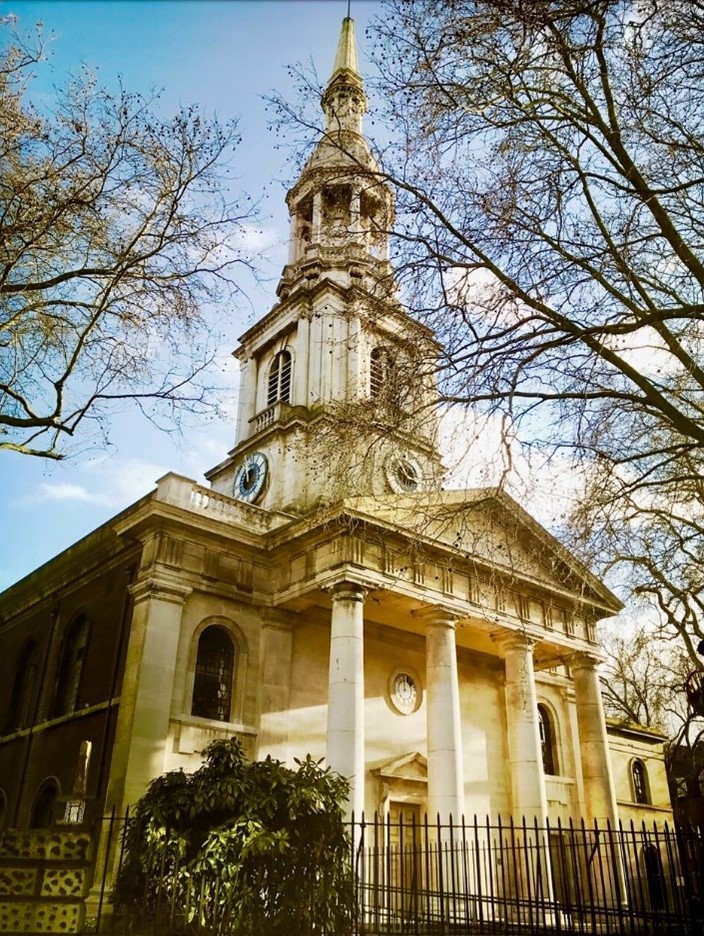 The medieval church of St Margaret, Lothbury was rebuilt after the Great Fire of London. The church and lower part of the tower were constructed in 1683-92 to the designs of Sir Christopher Wren. As with many of the other City Churches, the upper parts of the tower and spire were completed after a short pause. The lead clad timber spire is probably the design of Robert Hooke and was built in 1698-1700 by Robert Longland (carpenter), William Knight (plumber) and Thomas Brewin (coppersmith). The Grade I listed church escaped further damage during the Second World War and remains one of the most important and least altered of Wren's City churches.

The project centred on repairs and conservation of the tower and spire which offered the opportunity to examine the techniques used in its construction. Many areas were seen for the first time since 1699.The condition of the leadwork was identified as a concern following an inspection of 2012 when it was viewed from the roof of an adjoining office building. Sections of lead were slipping and the weathervane no longer turned. Further inspections by steeplejacks confirmed the poor condition of much of the leadwork.

The pros and cons of taking advantage of the expensive scaffolding to replace the lead, the loss of historic leadwork, including evidence of its detailing and the graffiti were reviewed and it was decided that the historic lead should remain in place as it was believed to be satisfactory for at least another fifty years. The spire was closed up, the original lead panels were replaced and the leadwork was repaired, including cutting through past repairs which had united adjoining sheets.The works have placed the spire in good order and have provided a valuable insight into the original construction techniques. 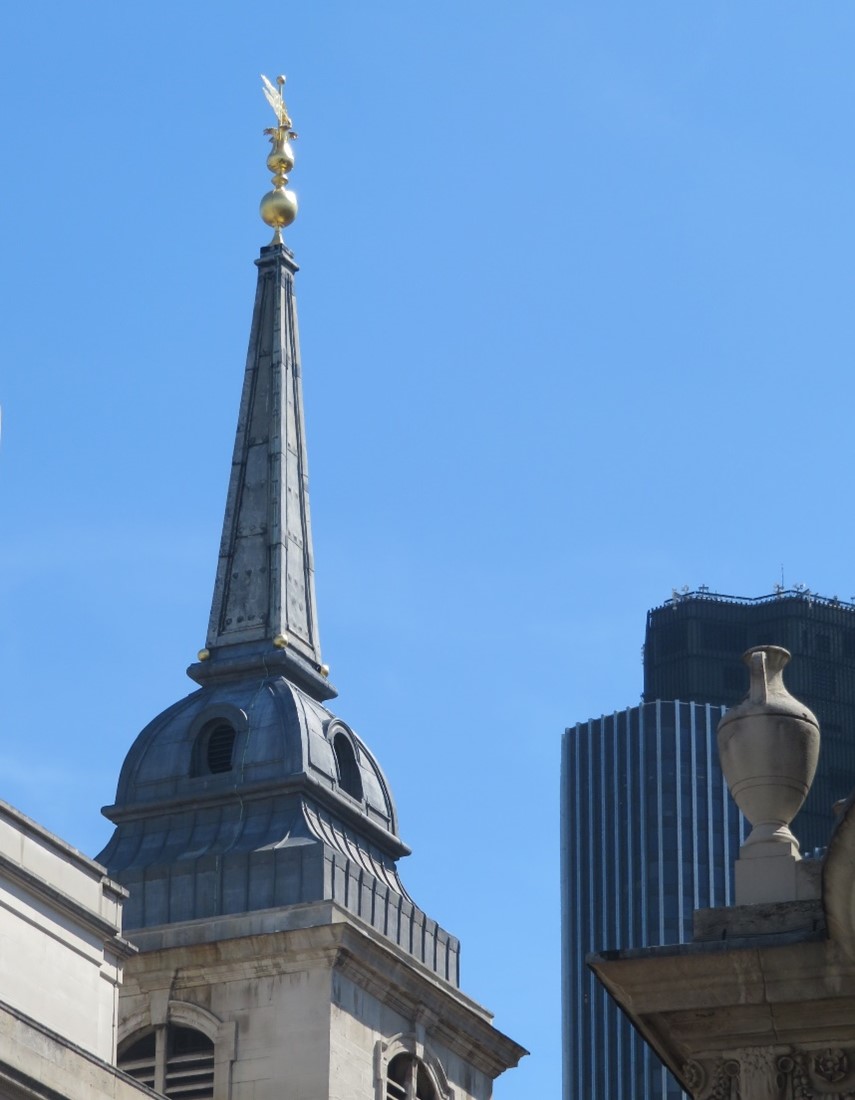 The tower and spire of St. Mary's church dominate the village of Adderbury and its surrounding countryside, just to the south of Banbury. This is a large and important medieval church, listed grade I. The church has origins as a cruciform planned church of the early 13th century. It was enlarged in the early 14th century with a new west tower, widened aisles and remodelled transepts. The tower and aisles include vigorous carving similar to the celebrated work of nearby Bloxham church, and several other local churches.

The project has involved repairs to the tower and spire as well as the well-known carved friezes, and a second phase has seen repairs to the carved gargoyles of the chancel. The main scope of work related to rebuilding the parapets, with a number of new stones, laid on bed so that they do not delaminate. The lead gutters were re-leaded and numerous other individual repairs were undertaken, including piecing in new stone, repointing and mortar repairs.

At the same time as the tower and spire repairs were being undertaken, the celebrated friezes were conserved by Alex Carrington. Two existing gargoyle stumps were so badly decayed that it was necessary to provided new gargoyles. The local primary school had used the potential design of the new gargoyles as a project and an owl and a bat were selected, avoiding some of the more gruesome options. The two remaining gargoyles were conserved and had stainless steel pins installed to reattach fragile pieces, with new lead cover flashings.

A Grade II* church, the south doorway of the church is thought to be Norman but the fabric of the main church is mainly 15th century and the north aisle 16th century.

Early in 2017, the parish council had asked their local builder to carry out some repairs to an area of plasterwork on the south wall. It was not long before the builder started uncovering what appeared to be remnants of wall paintings. On inspection it was immediately clear that the area of plaster was somehow linked to the remains of a rood loft stair, attached to the south wall of the nave at its junction with the chancel.The first priority was to have the area assessed and have some emergency stabilisation work carried out, and the areas of fragmentary and loose plasterwork and areas of wall painting were given temporary protection.

As the examination and research progressed, it became apparent that the dating of the successive layers of the wall painting schemes was tied intrinsically with the history of the rood screen: from its initial construction, to the subsequent removal of the rood loft, and then the final removal of the screen. Throughout the project it had been explained to the PCC that they would not end up with a beautifully complete wall painting, as might be found in other churches. The complexity of the different layers and schemes all played their part in the history of the wall and all had equal merit.

There was to be no removal of any later surfaces at the expense of any painted schemes to reveal earlier ones below and so by its very nature, the end result would always be a fragmentary display of the rich palimpsest that was contained within the wall. The careful way the work was carried out, with a light touch to the repairs, has retained the evidence for future interpretations of the building and its history.

Knowstone does not have the "wow" factor of a complete wall of a single scheme of wall painting. Nonetheless, the wall paintings at Knowstone, by their very fragmentary nature reveal much about the history of the church and the wider history of rood screens in Devon. Working with the various specialists and conservators allowed careful solutions to be developed to address the complex technical and aesthetic considerations. 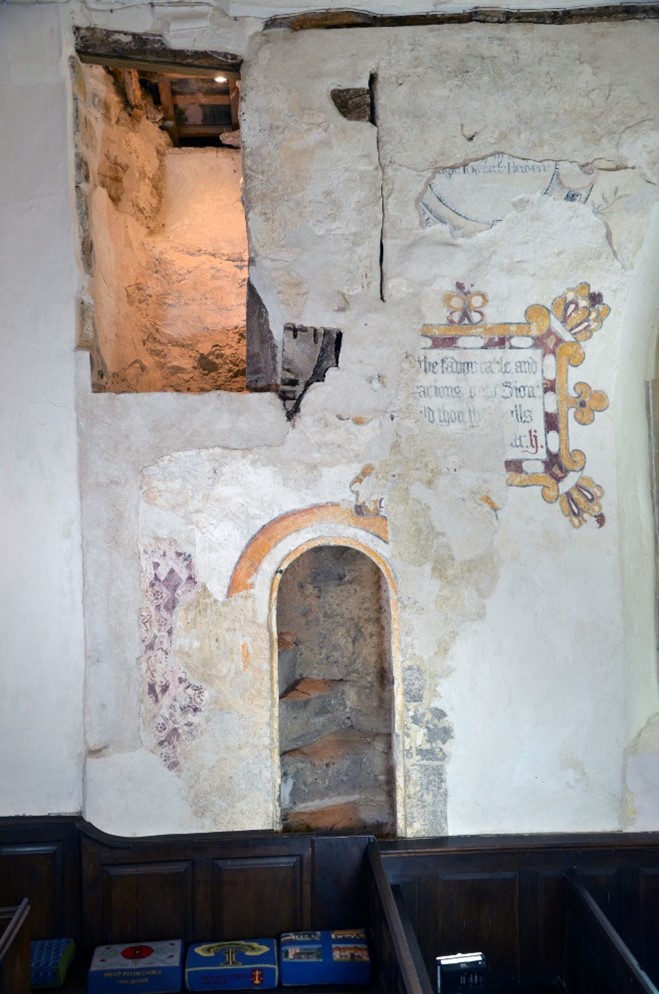